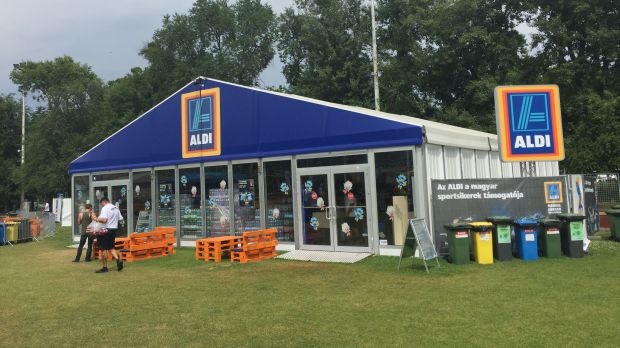 Hungary hosted the FINA World Championships for two weeks, with Aldi Magyarország as the main sponsor of the sporting event. The fan zone located on popular tourist spot Margaret island in Budapest included a pop-up Aldi store of more than 100 sq m, catering to the needs of sports enthusiasts and visiting tourists alike. 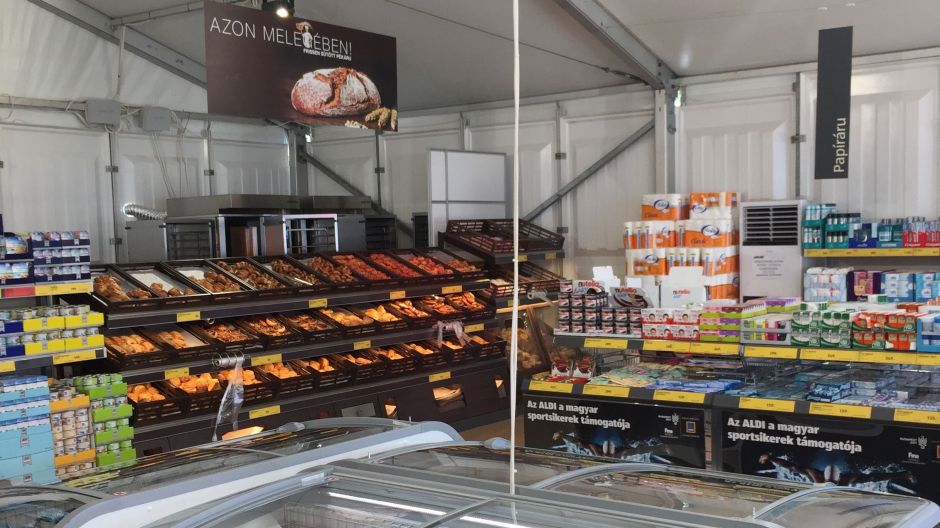 LZ Retailytics
The pop-up store also featured a selection of fruit and vegetables.

The assortment consisted of more than 400 everyday items, including beverages, snacks, fruits, canned goods and chilled convenience ranges; as well as a bake-off station offering freshly baked pastries. In order to manage the expected traffic in a pleasant environment, the store featured four checkouts as well as air-conditioning. According to Aldi Hungary this is the first in a series of several sports and cultural events under the patronage of the German retailer. 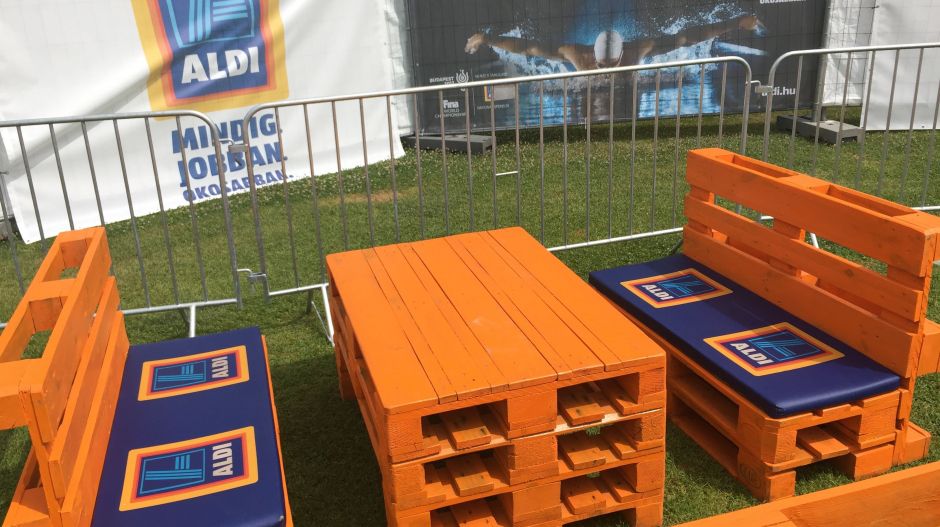 LZ Retailytics
The leisure zone around the store was made up of brightly painted euro pallets with Aldi-branded seat cushions.

The FINA 2017 sponsorship is a great example of Aldi’s down-to-earth commercial and marketing approach. Aldi in Hungary sticks to the basics: a clear-cut assortment geared to the specific customer needs, at low price levels. Any modifications to the existing concept typically address the question: what is the customer benefit? So how does the customer benefit from a time-limited, make-shift shop at public events?

Aldi stays true to its original concept, delivering basic ranges at highly competitive price levels. Posters in its pop-up shop inform that '…the prices of the products in our store are the same as those in the ALDI stores throughout the country…', including '...special price offers in our promotional leaflet'. Imagine the astonishment of local participants as well as visiting tourists (the announcement is printed in Hungarian and English) expecting to pay a considerable premium on snacks and refreshments - as is the rule for these kinds of events - and finding a low-price offer of the products needed at hand. A classic example of over-delivering instead of over-promising.

We consider the sponsorship of sports and cultural events including a physical sales point à la Aldi to be a viable long-term strategy to win over potential customers. With other discount retailers such as Schwarz Group and Jerónimo Martins also active in this field, the approach is not novel, but there is no doubt that it fits well with the roots of the original hard-discount concept. Reducing the vacation budget will certainly leave many participants, already positively attuned to the event in general, with an emotional goodwill towards the German discounter that might lead to a change in shopping venues when returning home. Home in this case might be Hungary but, considering the central touristic location, chances are, that it could also be one of the eighteen other countries where Aldi is present in Europe.

Also, we believe, that this form of marketing is money well spent for a growing operation, such as Aldi in Hungary. It is an open secret that discount operations need 100-130 stores to be able to financially carry the overhead of a central office and logistics. Aldi Hungary has reached this magical threshold and is now investing in marketing activities with a high multiplicator effect that will increase its market image while it is still at a low level of market penetration. Although we do not consider this marketing feat the philosopher’s stone to propel Aldi from its current number ten market position to one of the top places, LZ Retailytics data forecasts Aldi’s market share in Hungary to increase from 2.8% in 2016 to 4.5% in 2021, decreasing the distance to REWE Group. With an expectation of steady store opening numbers going forward, we are convinced that through these kinds of events the retailer’s positive reputation will precede its physical store openings and create a loyal followership.

Gain access to all photos from Aldi Hungary as well as more than 10,000 photos from other retailers by subscribing to LZ Retailytics here.