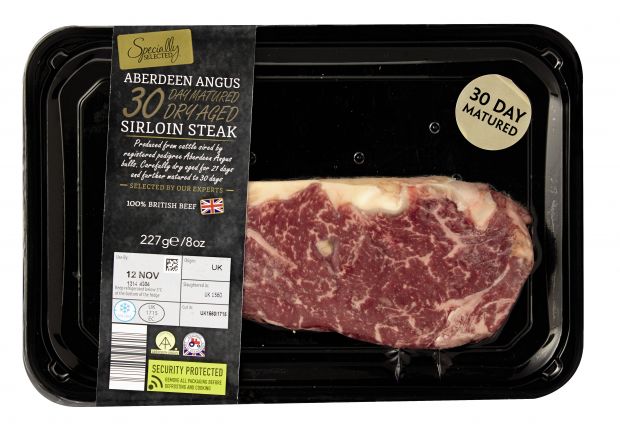 Aldi UK
Aldi has significantly bolstered its premium 'Specially Selected' range, which comprised some 584 products this year (including seasonal items). Many items in the range have won quality awards in the UK.

Aldi UK is forecasting that its ‘Specially Selected’ premium own label range will reach GBP1bn (EUR1.22bn) in 2018. According to the discounter, sales of the range have increased by 32% this year and are expected to reach GBP800mn (EUR 976mn) by year end, with a further 25% growth expected in 2018. A recent addition to the range was a selection of luxury ready meals, launched in September. The retailer has also been selling a ‘Specially Selected Treats Hamper’ for the Christmas period, which includes premium biscuits, Arabica coffee and vintage wine, packaged in a sleek black gift box.

Opinion Shouting About it

I don’t shop at Aldi. These days that is less a statement of snobbery; and more a sense of missing a trick – limited primarily by the absence of the leading discounter in my postcode. It’s funny how times change; having gone from being mortified at friends spotting your Aldi shopping bags, to now being embarrassed that you’re one of the few who’s not being savvy. Admittedly, I prefer the ambience of Waitrose (who doesn’t?), but surely it would be prudent to at least buy my basic groceries from a discounter. And, of course, Aldi doesn’t want shoppers to be limited in this way – demonstrated in its ever-increasing efforts to offer high quality – even award-winning – goods, to tempt us to increase our basket spend once in store. Hence the focus on ‘Specially Selected’, the retailer's premium line.

I’ve analysed retail for a long time and in the past, it was typical for British shoppers, as for many nations, to ‘up-trade’ at Christmas. Perhaps switching from their regular Asda or Tesco to Sainsbury’s, Waitrose or M&S for their festive shop. So, how did Aldi manage to get into the consideration set at the most lucrative time of year? Well, firstly by offering something different. Stollen, gingerbread houses – these were not staples in British homes until Aldi and Lidl became a significant part of our retail landscape.

The second important element is quality. And you don’t just have to take Aldi’s word for it, it is proven by consumer taste tests (a few years ago, Aldi’s Specially Selected mince pies even beat those from upmarket London department store, Fortnum & Mason). Industry awards – of which Aldi’s products have won many – give further endorsement and the retailer dedicates a whole section of its webpage to tell us all about them.

Thirdly and critically, Aldi is still the cheapest and importantly it is willing to keep undercutting its rivals to maintain this position. Even at Christmas, no-one wants to spend more than they need to on the basics, especially in a climate of inflation. This week, one of Aldi’s ‘Super Six’ is 500g of traditional Christmas turkey dinner accompaniment Brussel sprouts for just GBP0.19 (EUR0.23). In fact, Asda are currently just one pence more expensive, but it is Aldi that is getting the media mileage out of being the cheapest.

Specially Selected is seeing fantastic growth. The range has expanded significantly over the last year and includes many short-lived, fast-moving, higher ticket seasonal items, such as the Christmas treats hamper, which bolster its value growth, in particular. Many of the products are quite unique, in terms of the specific flavours or ingredients and often in terms of the packaging. This not only changes shoppers’ mindsets about the price they are willing to pay, but also makes the goods less directly comparable to their competitors’. The range is also appearing in categories where Aldi was previously under-represented vs. the UK supermarkets, such as ready meals and chilled desserts, plugging an important gap and at the same time reducing one of the barriers for some shoppers that remain sceptical about shopping at a discounter.

Arguably, what Aldi has done best though – alongside building Specially Selected into a one-billion-euro brand – is to not stop shouting about it.