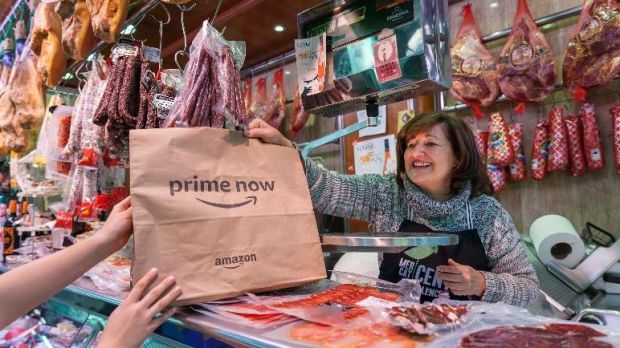 Amazon
Continued investment in logistics is allowing Amazon to expand its ultra-rapid delivery service Prime Now, which even delivers items from a traditional market in Valencia, Spain.

Amazon has announced a number of continued investment initiatives set to drive growth across its European markets.

In France the retailer is set to create 2,000 new jobs this year, growing from more than 5,500 employees to 7,500 by the end of the year. The new positions will be created in distribution centres across the country as well as the company’s head office and AWS operation.

In Italy Amazon is set to open its fourth distribution centre, which will open near Turin this coming autumn. Amazon will invest EUR150mn in the new 60,000 sq m facility, creating 1,200 jobs within three years. The distribution centre will serve northern Italy, helping the company to meet growing demand and support third party marketplace vendors.

In Spain Amazon has expanded its Prime Now rapid delivery service to a third city, Valencia, offering ultra-fast deliveries of products from La Plaza del Dia and a group of Mercat Central merchants. Valencia is only the second city in the world according to Amazon from which it offers deliveries of products from a traditional market. The selection includes products such as fresh fruit, vegetables, chicken, fish and beverages.

There is no surprise that Amazon is investing in its markets across Europe, since these continue to drive its international performance. Outside of the US, the established European markets are beginning to following the trends seen domestically for Amazon Prime adoption and are often the first to see new innovations from the retailer. Last year in Germany the retailer grew sales by 17.4% in local currency and in the UK revenues jumped by an impressive 24.9%. Further investment will ensure that this growth continues.

So what can we expect to see from Amazon in the coming year? Firstly, continued investment in logistics will enable Amazon to expand its assortment, fulfil more orders for its marketplace sellers and crucially bring delivery hubs closer to customers to enable lower costs and increased speed of delivery. Rapid delivery through Prime Now is an example of a service that relies on speed and accuracy and with logistics expansion we are likely to see this service reach more cities. As Amazon gains expertise in logistics we are even seeing it reportedly set to take the next step in Los Angeles, by offering a delivery service for businesses to compete directly with UPS and FedEx. Might this be a future option in Europe?

For grocery, we can expect to see a continued focus on Amazon Fresh and PrimeNow and the knock-on effect that these services have on shopper expectations and competitor service levels. As Amazon gains expertise and further integrates its Whole Foods operations it is likely to be an exciting year of developments. Delivering Amazon PrimeNow orders from a traditional market in Spain is just one step along this continued journey.

Private label development which ramped up last year can be expected to continue, leveraging Whole Foods and also Amazon’s increasingly collaborative approach with suppliers. This could see more new products and services launching into European markets, which we expect to be offered exclusively to Amazon Prime members, further strengthening its exclusive ecosystem.

There is no doubt that 2018 will be another exciting year of growth for Amazon, and one that continues to cause headaches for its European competitors. And as we have observed at LZ Retailytics – as Amazon's phenomenal growth trajectory outpaces that of the entire market, it is beginning to impact everyone from e-commerce competitors to bricks & mortar and multichannel operators. 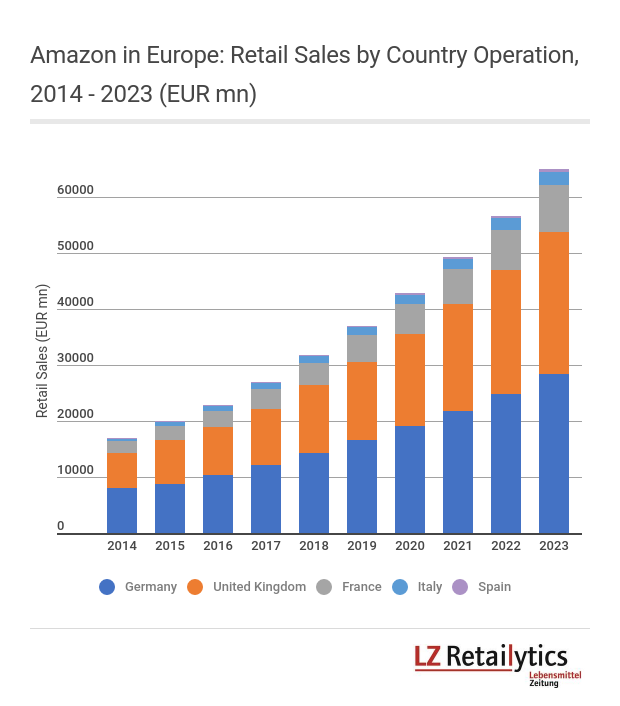