Carrefour’s Greek franchisee Marinopoulos Gruppe filed for bankruptcy, owing debts of some EUR 1.32 billion, local newspaper Kathimerini reports. This renews concerns over the faltering Greek economy, given the retailer’s position as one of the country’s largest private employers and raises anxiety over subsequent repercussions on suppliers.

08 March 2016
As the cracks become increasingly visible for Marinopoulos, the question raised is what to do with Bulgaria? The cash-strapped retailer is trying to bring fresh funds into its coffers to save what can still be saved, and has seemingly completely given up on regional expansion, as illustrated by the divestment of Macedonia earlier in 2016 and last year’s spin-off in Albania.The cash generated from its Greek hypermarket disengagement will give the retailer some breathing space but this is unlikely to last long, as LZ Retail Lab does not anticipate any positive progression of Carrefour Marinopoulos’ sales in Greece before 2018, and foresees a further 3,8% drop in 2016 to EUR 1.72 billion gross sales. Further divestments and cost reductions are to be expected.In light of these conditions, an exit from Bulgaria is merely a matter of time for the retailer. Marinopoulos already tried to partially divest of a joint venture with Piccadilly supermarkets, which quite tellingly failed due to lack of funds. The most likely reason that Marinopoulos is still in Bulgaria appears to be that it simply did not yet find a buyer for its business. As Rewe’s recent divestment of its Penny Discount stores in the country demonstrates, other retailers are leaving.  The most likely scenario for Marinopoulos going forward will be to sell its network, piece by piece  – which may take some time – or simply shut its stores down. 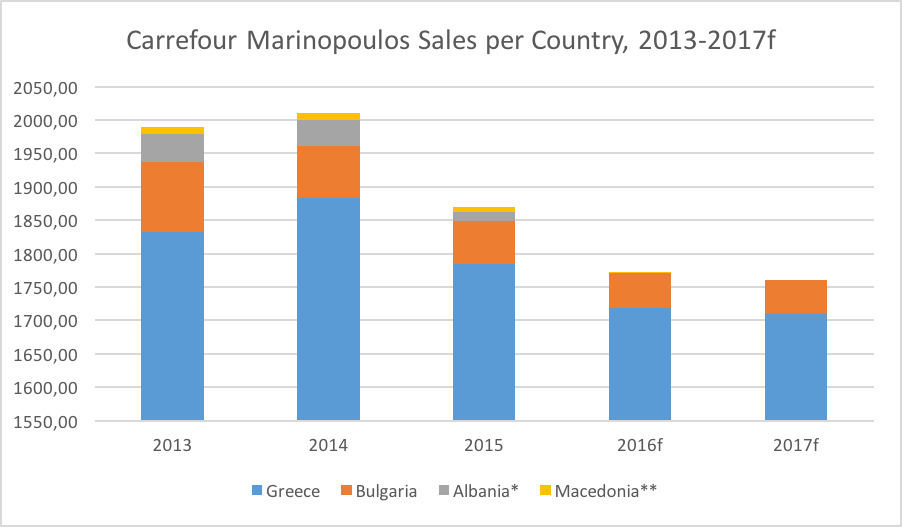 
*Marinopoulos spun-off Albania to the benefit of Balfin Investment Group in 2015.

** Marinopoulos shut down its stores in Macedonia in Q1 2016.