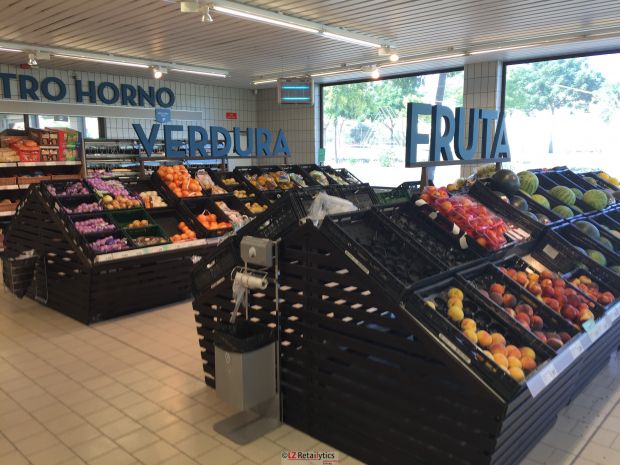 LZ Retailytics
Aldi Nord is working hard to make its concept more attractive, as seen at this new store in Spain.

Aldi Nord has chosen Belgium to launch the discounter’s very first e-commerce operation, Lebensmittel Zeitung reports. The shop is expected to go online later this year, focusing on non-food goods which will be shipped through a parcel service.

The German discounter has published job advertisements searching for E-commerce Reporting Analysts and Logistic Operations Manager E-Commerce, among others. Only last year, main competitor Lidl, part of Schwarz Group, launched an online shop in the country. Lidl's online site sells non-food goods from its weekly instore promotions together with a selection of wines.

11 April 2017
The changing times have finally reached Aldi Nord. The Essen, Germany-based retailer has decided to venture into new territory – virtual territory. This has come only after all of its discounter peers have already done so, trialling online shops for non-food or partly also food products in various markets. Sister company Aldi Süd is doing so in the UK – the most mature, but still maturing e-commerce market –  having given up its online business in Australia. Lidl sells ambient grocery online in Germany, but also non-food in Belgium and the Netherlands; Rewe Group’s Penny offers some goods in Austria; and Edeka’s Netto has an online shop for various products in Germany.

None of these retailers should be really happy with the results. Of course, one can get rid of leftover non-food promotions from the stores. And with wines, you can reach the affluent strata in London, for example, where discounters cannot afford the rent for spacious stores. But for the everyday food ranges, the general issues that apply to grocery e-commerce simply multiply for discounters: An above-average share of low-margin staples, and no chance to outweigh the low margins with the typical concept-inherent advantages of discounters – low staff costs, no service, overly high turnover, streamlined processes. In summary: no cost leadership.

So it is conceivable that Aldi Nord is late in joining the game. But it needs to do something. After all, Belgium (with the adjoint operations in Luxembourg included) is the last remaining market for Aldi Nord where it has not yet surrendered the lead to Lidl! Markets like the Netherlands, where Aldi Nord used to be a well established incumbent for decades, have been lost to the Swabian competitor over the past years. This is the clear result from an LZ Retailytics analysis of retail sales for the two discounters.

Lidl’s fresher, younger, more flexible and more dedicated approach has simply resonated better with more customers. But Belgium is still a stronghold for Aldi Nord. And it has held on tightly to its virtues, being the last to decide to list branded products just one year ago. In 2015, 99.7% of its 1,113 items were private labels. This was the highest share internationally. And the lowest total number of products. So now comes the time for change – even if this change comes from the virtual world.