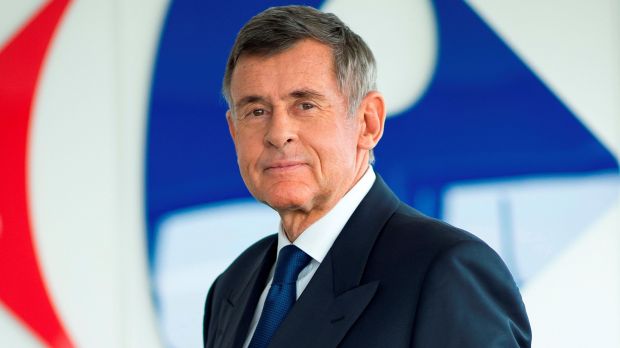 Carrefour / Nicolas Gouhier
After five years in position, Mr. Georges Plassat will hand over the reins to Mr. Bompard next month.

After weeks, if not months, of speculation around the successor of CEO Georges Plassat, French retailer Carrefour has officially appointed Alexandre Bompard as its new Chairman & CEO. He resigned from his current employer, cultural goods and consumer electronics retailer Fnac-Darty, and will take the helm of Carrefour on 18 July.

With regard to Bompard, who has earned a solid reputation in the French economic circles, Carrefour’s Board of Directors stated in a press release: “Mr. Alexandre Bompard has all the skills to succeed Mr. Georges Plassat and continue to develop and transform Carrefour in all respects”.

Opinion The Three Labours of Hercules

Speculating on Mr Bompard's strategy at this stage is premature and hazardous, and we feel it may be more relevant to consider the challenges he and the team will have to tackle. These certainly are of Herculean proportions. While both CEOs have different backgrounds, the profiles seem complementary to us. Mr Plassat has accomplished much by fixing errors of the past, and laid foundations on which to build going forward. Mr Bompard, with his experience as the head of a prominent cultural goods retailer, may contribute positively to the hypermarkets’ thorn in the side: non-food. The category is structurally pressured by online and specialist retailers alike. Carrefour’s large hypermarkets are largely exposed, a particular problem as they accounted for 51% of the retailer’s gross turnover in 2016. This is, to us, a sizeable challenge.

Further, e-commerce is something the retailer has committed itself to. Grocery e-commerce is already available across all European markets, even if the scale varies significantly. It is not yet the case for non-food as Italy and Romania still do not have an online offer. First steps on traffic generating marketplaces have only recently been made, but should soon be available across Europe (bar Italy). Overall, processes and expertise to achieve financial sustainability take time to build and refine. Even so, we feel Carrefour enjoys a good momentum, but much is still to be done. LZ Retailytics is a bit reserved concerning Carrefour’s ability to triple global online sales between 2016-2020, given the current trends.

Finally, the new CEO will also have to consider the thorny subject of the year-long Chinese sales collapse. Carrefour’s local strategy is, to us, relevant given the cards at hand. Even so, back-office work, the handful of store openings and its multi-format strategy seemingly failed so far to deliver any noticeable improvement. We feel the Chinese problem is a long-term difficulty — probably as much as e-commerce — should Carrefour wish to sustain its presence within the global retail landscape in the decades to come. Mr Bompard found himself with a jigsaw puzzle, which the French translate appropriately as casse-tête chinois, a Chinese brainteaser.