French retailer Casino has published contrasting results from its physical store banners, with a slight sales decline year-on-year (-1%) overall, but with like-for-like sales broadly static. The retailer emphasised both the strong performance of its franchise operation, bringing gross sales under banner to positive territory, and the dynamism of its online website, Cdiscount.

The retailer remains nonetheless committed to its long term vision for its multiple formats. Casino confirmed its intention to convert all integrated Franprix supermarkets to the latest concept by summer 2017. The retailer hopes to benefit from uplifted sales at converted units. Monoprix premium supermarkets recorded their highest traffic increase in six years, which the retailer attributes to its renewed commercial proposition.

In parallel, Casino is rationalising minimarkets, closing the smallest units and any that are underperforming. In fact, the retailer’s minimarket store count collapsed by 18% over the past six months, representing over 1,200 stores. The refurbished Petit Casino minimarkets will see their assortment evolve towards more snacking and fresh produce.

The retailer maintains its course for hypermarkets, characterised by continuous erosion of non-food sales. Capitalising on its online presence for the transition of the most web-permeable categories, Casino has reduced its selection of brown and white goods as well as consumer electronics; with home decoration and textiles benefiting from a greater assortment. Despite impactful promotional activity during the period from competitors, Casino states that its hypermarkets are already promoting at below average levels, and decreasing year-on-year. It remains adamant that it will sustain its EDLP strategy as a means to grow its sales efficiently. 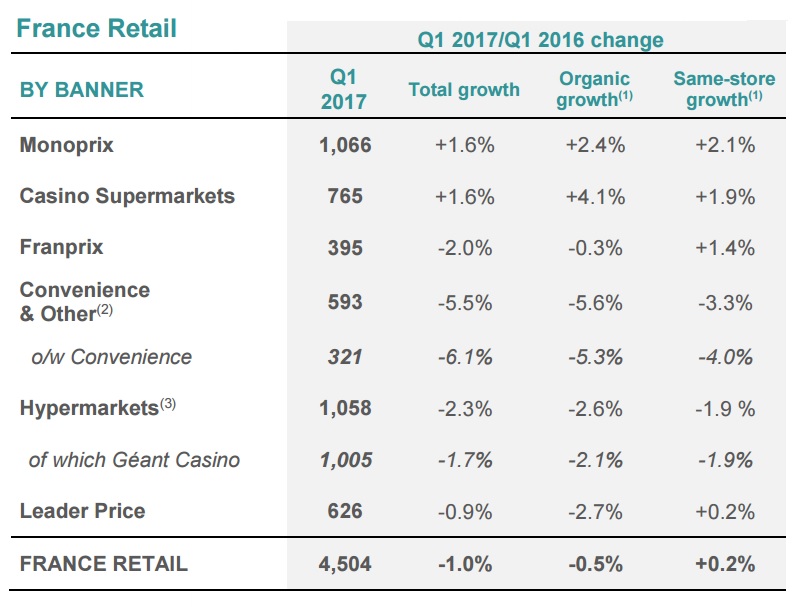 Opinion A Greater Reliance on France

We see the figures published by Casino as confirmation of the retailer's momentum. Casino is becoming more reliant on its domestic market for growth and profitability since the divestment of a number of overseas operations. The retailer is aiming for 15% trading profit growth from its French food retail operations in 2017. We see the drastic rationalisation of the minimarket store network observed over the past months; upgrading Franprix supermarkets with a more premium appeal; and strengthening the highly profitable Monoprix as direct consequences of this.

Casino's poor hypermarket performance should be seen in contrast to difficult comparisons year-on-year, but in no way does this suggest a sustainable turnaround. We should not forget that hypermarkets are looking to break free from the vicious cycle they got caught in – where loss in traffic was compensated for by drifting prices. More time is needed to assess the long-term impact of its strategy, which is centred around reducing the sales area and non-food disengagement. Overall, Casino's approach towards its hypermarkets may seem very cautious, not to say defeatist – or realistic, depending on your opinion – but the retailer enjoys room for maneuvre. After all, unlike many rivals, hypermarkets contribute only a quarter of Casino’s total French turnover.