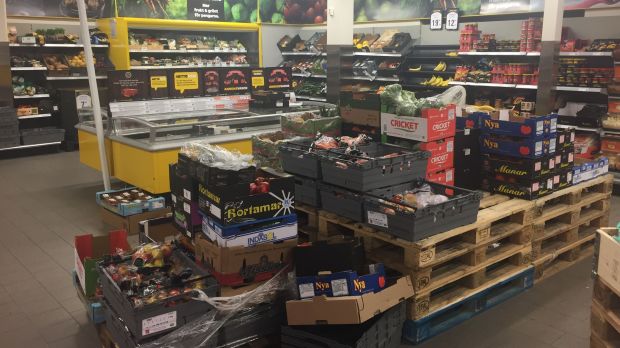 LZ Retailytics
The need to upgrade the fruit & vegetable section is particularly evident in this Swedish Netto store.

Dansk Supermarked is to open 40 new Danish Netto stores in the coming months, starting with the first three today (20 July) and then continuing with 3-4 weekly openings. Of the new additions, 32 will be former Kiwi stores for which 81 leases were acquired from Dagrofa earlier this year.

A new store concept will be implemented in all 40 stores involving elements that have been trialled throughout the year in Sweden, Germany and Denmark. This features larger fruit & vegetable sections, wider dedicated convenience food departments, more open fresh meat sections, a neutral colour pallet and new store fixtures and fittings.

The 40 store roll-out of the concept we've only seen so far in pilot stores doesn't mean that Dansk’s discount laboratory is done with its formula for discount 2.0. The Kiwi stores couldn’t be allowed to stand empty and implementing an almost ready concept was likely better than nothing at all. We can expect the new Netto International CEO, Michael Løve to make some tweaks once he arrives in September. But the outlines are seemingly in place and this gives a good picture to what we will see in future Netto stores:

These might sound like small changes but in truth something as trivial as the new grey colour could be enough to totally change the view a typical discount-refuser has of Netto. Back that up with an assortment overhaul and a more pleasant shopping experience and you could be set to convert the unredeemed part of the Danish population. And the currently exceptional price perception is unlikely to be affected much.

In its foreign markets the difference between the new and old stores will become even more dramatic. Sweden for instance has been neglected for some time by Dansk but could now get a fresh start through the new concept. Seeing as the banner is more of a clean slate abroad, the new positioning could also be easier to communicate. The biggest challenge here will be to turn it into a one-stop destination alternative.