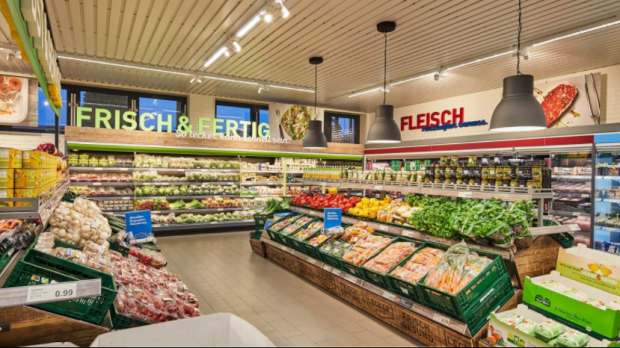 Aldi Nord
World of colours: The new store concept of Aldi Nord is going to be rolled out at a faster speed than originally planned.

Aldi Nord has extended its contract with Dr Marc Heußinger as the group’s CEO. The discount retailer confirmed on Sunday that Heußinger, who became head of the privately-owned company in 2011, will remain in situ for at least another five years, as the family shareholders have unanimously agreed to the contract prolongation. Only in September, the company appointed Torsten Hufnagel as the deputy for the highest position in the company. Members of the directorate (Verwaltungsrat) include Heußinger, Hufnagel, Oliver Elsner, Theo Albrecht jr. and Markus Brose.

Meanwhile, Aldi Nord said it intends to speed up store conversions in Germany. “Currently we are refurbishing some ten stores per week. From next year, we will speed this up to 25 to 30 stores a week,” Head of Marketing Kay Rüschoff told Wirtschaftswoche. A total of 160 stores will be redesigned by the end of this year; and it is thought that the revamp – named Aniko – will be finalised by early 2019.

At first glance it is striking that Marc Heußinger was appointed just months after Theo Albrecht sr., the founder and owner of Aldi Nord, had died in summer 2010. This may have given the impression of a new start for the discounter, that of all the major low-price retailers, was considered the most conservative and reluctant by virtually everyone in the industry.

However, Heußinger was reportedly already agreed upon much earlier as the interim successor of diseased Hartmuth Wiesemann. As far back as late 2009 or early 2010, indeed during Theo Sr’s lifetime, the board of the Foundation behind Aldi Nord had already been discussing Wiesemann’s succession, with Heußinger as the most likely candidate. Heußinger is said to have winning manners, show collegiality and, no less important, be on good terms with the owning family.

It speaks volumes for Aldi Nord that a person who has the blessing not only of the family but also its deceased founder has been given the freedom to turn the business upside down in many regards. He is the person behind the Perestroika-style corporate revamp in a company where, as the saying went, a run-down trolley was only replaced when the fourth wheel had also rusted through. Changing this attitude, not only within parts of the family, the management and the store staff; but also freeing up EUR5.2bn to repair what needs to be repaired and to pretty up what can be prettied up all over Europe, is no mean feat. For all this, the credit belongs to him.