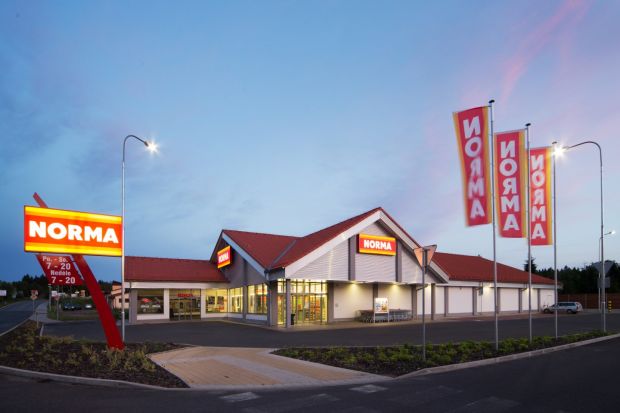 Norma
Norma is the smallest German discount retailer with a national coverage.

German discounter Norma has shown solid sales growth in its home market over the past financial year. CEO Gerd Köber told Lebensmittel Zeitung that although the number of stores remained virtually stable and price inflation had no impact over the period, sales climbed 3.5% to EUR3.36bn in 2016. This marks the seventh consecutive year of the retailer achieving sales growth beyond the 3% mark. Norma is the smallest of the German discount retailers with a nationwide network.

The continuing growth of the business is providing headroom for investment. Köber stated that around 100 stores are being replaced, refurbished, or extended each year. The total number of outlets remains at around 1,300. Norma is also in the process of modernising its logistical operations. Since 2011, nearly half of its 13 distribution centres have been replaced.

There has been no shortage of coverage about Lidl and Aldi going upmarket – becoming posh, pimping up their stores, jazzing up their ranges... This has been done with the aim of attracting more mainstream customers (in the foreign high-growth discount markets) or to exploit new growth sources (in mature markets, like Germany). Lidl’s going to America, and Aldi’s building up resistance. That’s expensive.

And Norma? Norma stays where it is. It benefits from the higher margins that the big guns use to finance all their ventures. This is because the days of price wars are over in German food retail – admittedly, with a few battles left between the drugstore operators.

Norma does not want to ramp up its stores. Clean and functional, that’s all they need to be. There are enough customers who appreciate this old-school hard discount approach. And no, there is no coffee machine at the exit. Norma, due to its limited means, has not left the city centres for the greenfield sites, as the big players have. Unsurprisingly, Norma is often the only discounter left where you can quickly grab some food for dinner after a stroll through the shops in the old town.

Norma, due to its limited size, is much more flexible in terms of offering special interest products – be they regional items or vegan foods – as it can deal with much smaller suppliers in shorter timeframes. Brand giants love to use Norma for testing new products. It’s just unfortunate that many stores crammed with such pseudo-innovative leftovers bear witness to this.

By saving costs in this way – by turning a necessity into a benefit – this is how a small independent retailer can manage to survive against the mighty behemoths. Above all, Norma is clever enough to realise that there is a deadly temptation which it must never fall for – to compromise on solid food quality. If quality is gone, your business is gone. That goes for discounters as much as delicatessens.