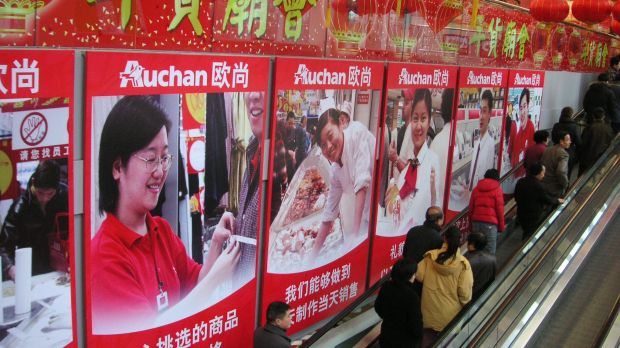 This acquisition of the shares owned by Auchan's partner, Ruentex, would put Alibaba on an equal footing with the French retailer at 36.18% and 36.16% share respectively. Ruentex now owns a 4.67% economic interest in the joint venture. The three partners added: "the new alliance will enable Sun Art’s activities to benefit from Alibaba’s digital ecosystem. It will digitise and introduce new retail solutions at Sun Art stores, including online and offline integration together with modern fulfilment and personalised customer experience".

This move is impressive in terms of scope and echoes in the retail scene not only in China but also globally. It once again shows the necessary convergence of physical retailers seriously gearing up their online proposition and online pure players which need a physical network on which to anchor themselves in their shoppers' lives.

While the Chinese Communist Party has been trying to spur internal consumption to offset the reliance on exports, most top retailers recorded sluggish consumption in China. This is understood to benefit developing rural areas rather than cities where these are established. The underlying effect is that, faced with a limited retail offering but equipped with smartphones, these shoppers spend their discretionary spending online, without waiting for a hypermarket store to open nearby.

Chinese Sun Art is outperforming other western retailers such as struggling Carrefour, or Tesco whose brands were phased out a few years ago. Even so, Sun Art also has reasons for concern, with revenue growth decelerating from some 14% in 2012 to ca. 4% in 2016. More recently, the company published a 2% growth year-on-year for the first six months of this year. These figures include its fast-paced store openings, hiding same-store sales which are in the red.

Within this context, it comes as no surprise that Sun Art has been developing a multi-format approach, including automated minimarkets as well as its Feiniu online operation, to keep pace with rival China Resources Vanguard.  Teaming up with Alibaba is most definitively expected to boost the digital transformation of Sun Art by building a credible online & offline consumer proposition appropriate for the Chinese consumer, hopefully translating into increased instore-traffic.

Alibaba has already tied up partnerships with multiple retail companies, including Shanghai-based Bailian Group earlier this year. It also unveiled a handful of its own digitally-connected supermarkets under the Hema brand. This move nonetheless raises several questions, such as: to what extent will Sun Art hypermarkets be impacted? What will become of the Feiniu e-commerce platform, which remains loss making despite substantial year-on-year growth? And finally, could this partnership with Auchan be a springboard for Alibaba to strengthen its presence in Europe?