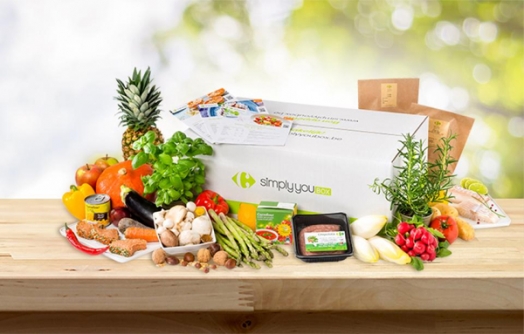 Carrefour
Carrefour introduced its meal box in Belgium in October 2016.

Carrefour has introduced "Panier Cuistot" (Cooks' Basket) recipe boxes in France, delivering tailored ready-to-prepare meals to the customer's doorstep. Each box includes two step-by-step recipes (tutorials can be found on Youtube) with all the necessary ingredients. A box for two people is priced EUR20, and EUR48 for a family of four.

In the same press release, the retailer makes a parallel with two other innovations introduced over the past year. Carrefour's Pikit intelligent connected device allows shoppers to scan items at home to be added directly to their online shopping baskets. The French retailer has also operated a one hour grocery delivery service for several months within the Greater Paris area and plans to roll out the service to Lyon in May 2017.

Opinion Staking its Claim on Online in France

30 March 2017
We see this announcement as a statement more than news. Taken separately, the information is fundamentally not revolutionary, neither for the industry nor for Carrefour. Recipe boxes have existed for a decade in the Nordics, and many retailers across Europe have introduced such services, from Ahold in the Netherlands, to ICA in Sweden and even British Sainsbury's, which just teamed up with online pureplayer Hello Fresh. For Carrefour, the recipe box and Pikit innovations have already been piloted for some time in neighbouring Belgium.

We believe the key message here is for Carrefour to  stake its claim on the online grocery space in major French cities (and particularly the Paris area with its 10+million inhabitants) against any invasion by Amazon, particularly ahead of any potential landing of Amazon Fresh in the French capital city, where Prime Now already operates. Pikit is additionally a response to Amazon Dash, which uses technology to allow shoppers to add items more quickly and easily to their online baskets. To offer deliveries in less than an hour, the retailer intends to leverage its dense store network, giving it an edge over the US pureplayer.

Overall, Carrefour is at pains to reassert its multi-format ambition, which has translated in recent years to building a convincing grocery e-commerce proposition (including the professionalisation of Drive click & collect and the acquisition of online grocery pureplayers). This also serves as a reminder of its ambition to more than triple online sales over the period 2016 to 2020 to EUR4bn globally.