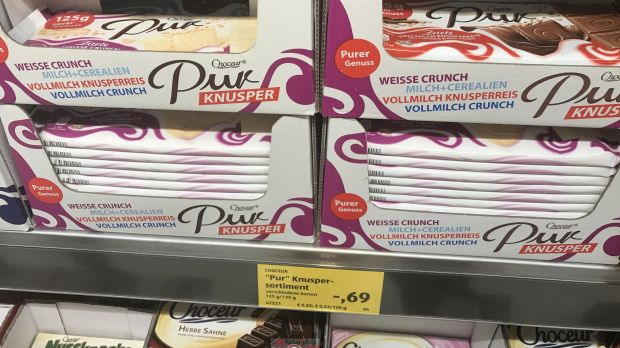 LZ Retailytics
Monsieur, how would you pronounce Choceur? Aldi Süd is re-assessing all of its 90 private labels in Germany; among them Choceur and Moser Roth, Expressi and Amaroy, Kokett and Tandil.

Aldi Süd is about to strategically reposition its 90 different private labels in its homeland and most important market, Germany, Lebensmittel Zeitung has learned. The discounter has appointed Hamburg-based Scholz & Friends as its new marketing agency with a mandate to renew its own brand architecture, aiming to align its increasingly sophisticated ranges with the new store concept that is currently being rolled out.

Part of the plan is the repositioning and reworking of its existing brands. This may potentially include the discontinuation of some less relevant labels, in favour of a clearer and more visible presentation of the remaining ones. Apparantly, Aldi Süd’s operations in the UK, Australia and the USA will be taken as a model for the relaunch.

Opinion The Mute Grandeur of Choceur

Aldi Süd’s greatest success on record has recently occurred in its English-speaking markets. Its growth rates in the UK have levelled off in the double-digits for years now. So too have competitor Lidl’s. Aldi's stores in the British Isles – that includes the Republic of Ireland – are the most productive worldwide, according to LZ Retailytics data; with each outlet recording double the sales of its US stores. But in the US, it is also growing fast, covering more and more states, as it does in Australia. In both markets it does so largely without the competition (yet) from its nightmare Lidl.

These markets have always been the prime countries of marketing, of appearance, with millions of employees in charge of making things look good so that they make people feel good when they finally buy something after they've longed so long for it. Aldi’s products, in the previous decades, were anything but that. This has changed, thanks to professional marketing across all channels. Along with this year's Santa, the successful Anglo approach is now finding its way into the retailer’s German stores as well.

It’s therefore no surprise that the brand-new – and very first – joint German Christmas TV spot of Aldi Nord and Süd couldn’t be more English, at least from the perspective of a German. There’s a person wearing a Christmas jumper, there is a traditional American Christmas tune playing, there is not a single word of German uttered (the written final message aside), but a deep, American ‘oh yeah’ from a bearded man who suspiciously deliberately, remotely resembles some guy called Santa. All protagonists look appropriately indistinct so that everyone can project his or her respective understanding of variety in the spot - social, religious, gender, ...

Back to LZ’s news story: this will all now be taking over Aldi Süd’s shelves in Germany. A very good idea. Building a consistent look and feel makes perfect sense. I won’t get a prize for saying that, I know. But there were times not that long ago when someone would have done well to tell Aldi that. Specifically, turning own labels into own brands has so far been demonstrated by Lidl in a more consistent way than Aldi.

Just like in every family, you have to deal with what you’ve inherited; and decide whether you want to carry it on regardless or make a sharp cut. Both Aldi’s have brands that could be cut. But it is hard to part company once you’ve embosomed Ursi (a Nord pudding brand for just a handful of products that sounds very much like the familiar form of a typical first name for a man from Switzerland); or the letter potpourri of Milsani and Milsa+ (Nord) versus Milfina (Süd) and Milasan, a brand. Given the ongoing overflow of input every day, more discipline could make life easier. And clearer.

Take Château, for example. The Nord’s dusty chocolate brand, originally used for Belgian chocolates (there was a time when Belgium was famous for its chocolates in Germany's discounters!), has a slightly more modern equivalent, Choceur, at Süd. Problem being for the branding professional that everyone pronounces it incorrectly, 'shockeur'. The French – and Belgians as well, but they haven’t been around in Aldi’s choc business lately – would correctly say 'shosseur'. - Trivial? Perhaps, but if you build a brand and air it on TV, you should at least know how to say it. Lidl pronounces Leedle, just like needle, they tell the Americans.

The strategic repositioning comprises the range composition as well, reflecting the long-term trend towards more fresh, convenient and regional foods, the dovetailing of additional brand listings and the implications on private label. What has not been said, though, is whether the reassessment is going to look at product quality. However, this will be more relevant than anything else, in the longer term. We were able to trace how Lidl managed to outsmart Aldi in a lot of points; and in part this applies to product quality. There has been a quality competition going on, alongside the price and growth competition. It was - among other topics, of course - the permanent quality improvement that has helped Lidl annihilate Aldi’s key USP. Aldi’s repositioning now must not forget the quality side.

Aldi does have the suppliers to do so. They include famous names like Storck, maker of Choceur, that produce confectionery specialities that others simply cannot match (similar to Ferrero with its largely unique range of sweets). Despite all up-trading, suppliers will need to work on the product quality for low-end products too, with regard to not only recipes and sustainability, but also clean labelling and health issues - and simply better taste. Quality matters – Aldi Nord is communicating this strongly in Belgium, where it has just published detailed documentation of scientific product tests. Quality as a regained USP: only this will create a base for future growth that goes beyond the necessity to plough large amounts of money in super-professional, super-expensive TV spots, continually every other quarter.

The Christmas TV spot could be airing anywhere, from Aldi California to Aldi Australia, since the sun never sets in the Süd's empire of efficiency. But in the spot, for a fraction of a second, there’s a jar of Aldi Süd’s whipping cream from Germany visible in the fridge. Milfina. Stupid enough, it is the absence of product packaging, brands and any remembrance of the origin that makes this Christmas spot (and all?) so festive. We know this is due to the setting, and to the fact that Nord and Süd carry different private brands. So, why Milfina but not Milsani? – Who knows, in the future, perhaps we can find one product, under one single private brand, in a united brand world of two (still divided) Aldis?