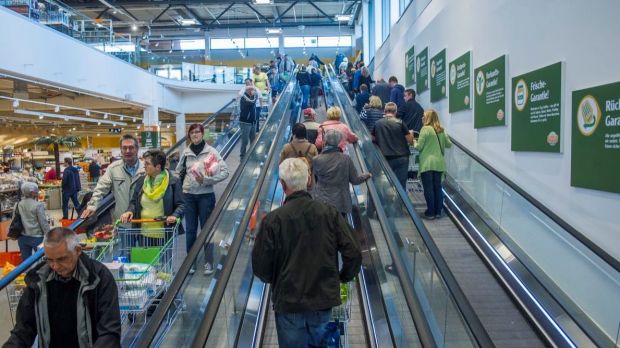 German hypermarket operator Globus is piloting instore tracking via trolleys in a store in Saarbrücken-Güdingen, Lebensmittel Zeitung reports. Working together with researchers from the Innovative Retail Laboratory, the retailer wants to find out about the routes customers take when walking around the store. The pilot will run until the end of this year, with no clarity yet as to whether the project will be continued after this point.

The trolleys in the store are equipped with Bluetooth beacons which enable the retailer to not only get to know the different customer groups, but also to better predict busy times at the checkouts. Customers are grouped into three segments: quick top-up shoppers; those doing their full grocery shop for the week; and the third group consists of the shoppers who take in every aisle as they do their shop. According to the customer group a shopper is assigned to, the algorithm can predict how long the shopper will stay in the store. The data can also provide insights regarding the attractiveness of certain parts of the store.

Instore tracking is not a new technology, but to date German retailers have been quite cautious about this topic. In other countries, retailers have already been experimenting with instore tracking for a few years. In addition to British Tesco and Waitrose, other European retailers such as French Carrefour and Swedish ICA Gruppen have also implemented trials or installations.

Typically, retailers install beacons in certain spots in their stores, allowing low cost and easy shopper tracking via the shoppers’ smartphones. The fact that Globus has taken a different path by equipping trolleys, is not surprising. German customers are particularly cautious regarding their data privacy which could result in only a few customers allowing the retailer to track their phones. Equipping trolleys with beacons is a smart way of solving this problem as it is 100% anonymous. However, this solution doesn’t allow the retailer to provide customers with personalised promotions since the data collected only gives a picture of different customer groups rather than on individual shoppers.

In the future, Globus could also use the technology for instore navigation as well as location-based and customised promotions. Perhaps one day, when the retailer can convince its customers about the benefits, they will allow Globus to access their smartphones. As it stands the retailer is not sure if enough customers can see the benefit of using this technology, as giving away their data is something that Germans do not like to do. In return for coupons or discounts, however, there could be enough customers willing to participate. Retailers doing this in Germany must let their shoppers know that they are collecting data – ideally in advance rather than being publicly berated after the event in the news. This happened to Metro’s hypermarket banner Real which had to discontinue its face recognition project because of customers’ concerns about data privacy.