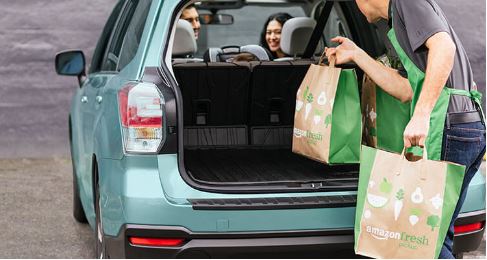 Amazon
Amazon Fresh PickUp is a new quick, convenient service that will be available to all Prime members without the need for an additional Prime Fresh subscription

Amazon has opened its first two grocery click & collect stores in Seattle, giving indications of its physical store and grocery ambitions. AmazonFresh Pickup locations operate in a similar way to a French Drive concept. Customers order and pay online at home and then drive to a nearby pickup location to have their groceries loaded into their car by Amazon employees. There is no order minimum and groceries can be ready to collect in as little as 15 minutes.

Two locations have opened to date in the Seattle neighbourhoods of Ballard and SoDo, Amazon announced on its website. The stores are initially accessible only to Amazon employees while the concept is being fully tested, but are expected to open to the public shortly.

A key difference between the Amazon Fresh home delivery service and Amazon Fresh Pickup is that the new service will be available to all Prime members and will not require customers to pay an additional USD14.99 (EUR14.03) per month to subscribe to Amazon Fresh. Priority services will, however, be available for Amazon Prime Fresh subscribers, such as priority pickup within 15 minutes of ordering.

With this latest news, it is becoming ever clearer that Amazon is entering a key development phase for both the grocery category and for physical retailing – and it is high time that all competitors had a counter-strategy prepared.

It will take Amazon some time to test all the new concepts that it is developing, but grocery retail is at the heart of almost all significant new developments (Prime Pantry, Prime Now, AmazonFresh, PickUp and Amazon Go). This demonstrates that the retailer is serious about this category, which together with Prime membership is driving volume, frequency and thus revenues.

There were some doubts this week cast over the Amazon Go cashless grocery store trial, after technical difficulties arose when more than 20 people were in the store or when goods were moved to the wrong shelf locations. This is another concept that is being tested on Amazon employees. However, the PickUp concept is far simpler in terms of technology and holds broad appeal to all Prime members. We can be sure that Amazon will perservere and win through with at least one of its many new and innovative concepts.

It is also clear that successful concepts once rolled out into its domestic market are most likely to come to its two biggest international markets in Germany and the UK shortly afterwards. LZ Retailytics already forecasts that AmazonFresh will generate revenues of EUR186.4mn across these two key markets by 2020. Suppliers will be keen to work closely with Amazon going forward. For retailers, now is the time to sit up, take notice and plan for the inevitable disruption.