Tesco has completed its first online grocery delivery by robot. The items were successfully delivered to an address in Central London, as part of the retailer’s Tesco Now one-hour delivery trial, which allows shoppers within a three mile radius of a store to order up to 20 items.

The retailer partnered with Starship Technologies, using a six-wheeled self-driving buggy, fitted with anti-theft technology and with space for two shopping bags. The online-connected robots use 3G to navigate to the customer’s address, avoiding obstacles as they travel at around 4mph (6.4km/h). A smartphone app can be used to track progress. 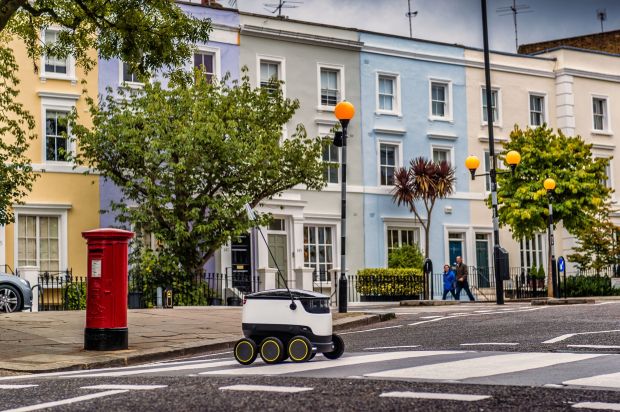 Starship Technologies
The future of the last mile? Tesco, Hermes, Metro and Just Eat are all testing this technology.

It may be just a trial for now, but retailers are increasingly seeing automation as the future of online, both to drive profitability and reduce the cost of the last mile. Starship Technologies, which supplied the robots to Tesco, has also worked with Hermes for automated parcel collections, with Metro Group in Germany and with Just Eat in the UK to trial takeaway deliveries. Meanwhile, Amazon continues to progress further down the automation route, with increased investment and success for its Amazon Prime Air drones for the rapid, driverless deliveries of the future.

This week we also heard of a similar, yet very different last mile cost initiative. As it expands its foray into two-day shipping of more than two million items online, Walmart in the US announced that it is testing the concept of paying its own store staff to drive packages to customers’ homes on their commute home from work. It is a form of crowdsourcing, but one that Walmart has at least some control over.

So, which will triumph – man or robot? In the short term we can probably expect to see crowdsourcing continue to drive momentum. However, in the longer term our money’s on the robots.