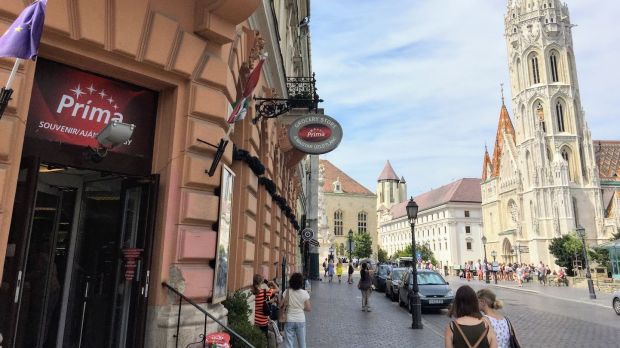 LZ Retailytics
CBA Prima supermarkets are often located in high-traffic tourist areas, as can be seen here next to the Matthias Church in Budapest. This leads to increased footfall, but also higher rental costs.

Just one year ago the CBA network lost 70 shops belonging to regional cooperative Palóc Nagykereskedelmi due to the latter's default.

It seems that the tide has turned against the long-standing advocate of Hungarian small shop owners and regional cooperatives. When reading about CBA ten years ago, a retail enthusiast could have imagined a new Pan-European defender of traditional retail on the rise, defying the advancing discounters and multinational grocers.

Seen from today’s point of view, the cooperative has withdrawn from half of its former countries of operation, and its position in the respective national markets is deteriorating. Lithuanian CBA Aibė has dissolved, the Croatian network was taken over by NTL, with only the logo bearing a resemblance to the former Magyar affiliation, and the cooperation with Polish GK Specjał was downgraded to an ‘exchange of experiences’.

It is not only multinationals with their streamlined operations, professional offer management and modern appeal that are eroding CBA’s international position, but also fellow cooperations and franchises in its home market. In Hungary CBA’s peers have been upgrading their network and unifying their market presence to a point where they clearly outperform the long-established domestic leader.

Even close political allegiances to leading political fractions have not helped to create positive growth momentum. Ruling party Fidesz back-pedalled its restriction on Sunday opening times after public discontent threatened political support. The increase in minimum wage and mandatory staffing backfired on the likes of CBA and Coop, forcing them to close part of their store network on weekdays with lower traffic. This at a time when Lidl increased wages for store employees nationwide by 20%. Ironically, now it is the European Union that is preparing a subsidy system for retailers operating in low-populated settlements.

As a result, we expect the cooperations and franchises of CBA, Coop Hungary and Real Hungaria that made up 83.9% of Hungary's organised retail outlets in 2016 to successively lose market presence to international players, dropping to a share of 79.9% of stores in 2021.