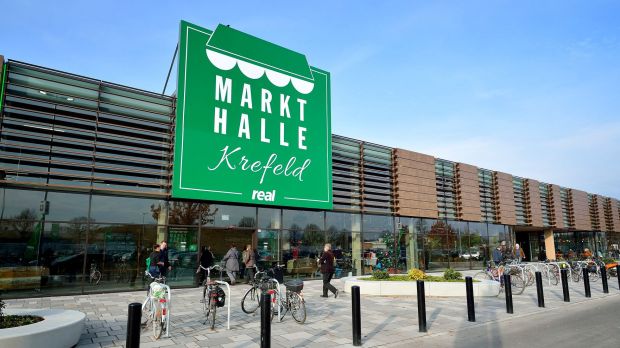 Real
Real's Markthalle in Krefeld is the flagship of its Food Lover concept.

According to Lebensmittel Zeitung, Metro AG's hypermarket operator Real is to invest heavily in refurbishments of its network. As a result, the stores in Braunschweig and Bielefeld are to be converted to its new Food Lover concept, which has already been tested in Krefeld. There are reportedly around 30 other stores on the list for a potential revamp of this kind, with large scale renovations also scheduled for several of Real’s around 100 'core' stores. This term is used by Real for stores with an economically positive perspective.

Real is also to invest in refurbishments of those hypermarkets it classifies as 'classic' stores. Performance of these is understood to be weaker but set to be improved thanks to the planned commercially sensible investment in modernisation. Real will start with eight of these locations.

According to Lebensmittel Zeitung, there are seven Real outlets whose future remains uncertain due to their weak performance. Two stores are definitely confirmed for closure in spring 2019.

Opinion Make or Break Will Be Staffing

Real’s new Food Lover concept is sometimes described by the retailer in a way as if it was its new hope, a silver lining. Metro claims that it seems to have struck a chord with this concept but that profitability is absolutely required for the level of services offered. The retailer has now finished the concept review, managing to optimise the sales area and reduce investment to make it suitable for a further roll-out. However, even if the company worked on efficiency of investments there are still some challenges that should not be underestimated. The new concept requires more staff on the sales floor. This reflects a fact that future-proof big-box operators have already started to embrace: good employees are essential; they are the key differentiator.

For Real, however, they also tip the scales. By March 2018, the retailer and its employees will have to agree on a new remuneration structure. The fact that the company is proudly announcing investment plans plus stating seven struggling outlets is probably a strategic attempt to spur the discussion and create sympathy for the troubled banner. The chain as well as its parent company Metro have explained at any possible occasion that it is of great importance for the profitability of the entire operation that both parties find an agreement. If not, Real would need to revert to payments in line with the industry-wide multi-employer agreement, which will further put the financially strained operation under pressure.