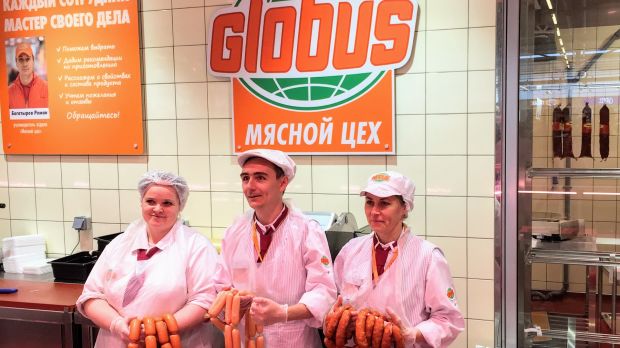 LZ Retailytics
In Russia, Globus has created a USP thanks to its unique offering and quality perception. Instore production plays a major role.

German hypermarket operator Globus is considering opening smaller stores in Russia, Kommersant reports. The retailer currently operates stores with a size of 10,000 to 12,000 square metres in the market. The sales area of the new stores will be reduced to 5,000 square metres.

According to Country Manager Volker Schaar, the strategic outline for the project will be completed in the second quarter of 2019. The opening of the first compact hypermarket will take place afterwards. Globus also plans to continue opening regular sized hypermarkets in Russia. According to the company, construction of two of these stores will begin in 2018.

Opinion A Strategy With Multiple Advantages

Globus in Russia does not compete with other hypermarket operators on price, but rather on their offering and the quality of the assortment. As a result, the retailer has a unique position in the Russian retail market. Unlike Auchan it is not dependent on pure efficiency and this allows it to target a different, more affluent shopper base as well as to experiment with formats. The compact hypers will help to further pursue Globus’ strategy of differentiation.

The new, smaller concept could support the retailer to increase penetration in the most promising catchment areas as well as to tap into totally new locations. All of Globus’ existing 12 hypermarkets are located within 200 km of Moscow. The compact hyper concept is reportedly planned to be designed in a way that it is suitable for expansion to other regions in the centre of Russia. There, it will give Globus the opportunity to open stores in city centres where prices and rents of suitable store sites are lower than for those close to the capital.  At the same time, the general investment required to build and open smaller stores is lower. Both will enable the retailer to open more stores in shorter periods of time.

Internationally, the trend of smaller hypermarket sizing is not new. With the rise of e-commerce, shoppers have begun to buy fewer non-food items in big box stores. From a strategical point of view, it also seems to make sense for hypermarket and superstore operators to specialise and show competence in their core area of groceries. And of course, it also is more difficult to manage and organise a broader range.

These are likely to be amongst the reasons for Globus’ competitor Lenta to also follow a downsizing strategy in the country. According to Kommersant, 93% of Lenta's new store openings will be compact hypers with the trend to continue in future. Lenta also gave another reason for the strategy shift: its target cities are already relatively saturated when it comes to large hypermarkets. As a result, it has become increasingly difficult to find attractive locations.

While other Russian hypermarket chains are already experimenting with formats sized significantly below Globus' anticipated 5,000 square metres, we believe that downsizing has its clear limits for the Germany-based player. Due to its strong focus on fresh goods and customer service (e.g. via instore counters) it is unlikely that Globus will open stores below 4,000 square metres in order to keep its USP.