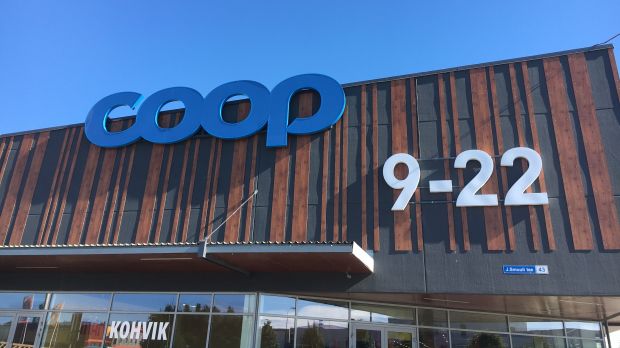 Coop Eesti
This Maksimarket in Tallinn was the first store to carry the new Coop name. In line with the announcement, we might expect ‘Maksimarket’ to be added after the Coop name shortly.

Estonian grocery market leader Coop Eesti is to rename all three of its grocery banners in the country, according to Estonian newspaper Äripäev. The Maksimarket hypermarkets and Konsum supermarkets will be rebranded to include the Coop name; and the A ja O neighbourhood stores will simply be called Coop, followed by the name of the town or suburb. The re-bannering project is planned to take place over the next year and a half, coinciding with the previously launched store refurbishment programme.

Jaanus Vihand, Chairman of the Management Board, told Äripäev he expects the initiative to strengthen brand awareness and market share for the retailer. He also revealed that Coop has opened three hypermarkets under a brand-new concept and will roll this out to several of its big boxes going forward. A new Konsum supermarket concept is also being rolled out.

Opinion A Strong Brand To Win in the Cities

This is the next logical step following the retailer’s name change from ETK to Coop Eesti in late 2015. The new brand will herald a modernisation process in the company including both closer co-operation between the retailer’s 19 regional consumer associations, as well as significant investment in store refurbishments. Extending the name change to the stores allows them to profit directly from this process and will make national marketing campaigns much more efficient.

The initiative also supports the retailer’s over-arching strategy to  double its market share by 2025. To do this, it needs to compete more directly in the country’s largest cities, locations where it is currently comparatively weak. A fresh and modernised brand, accompanied by store concepts that are relevant for city locations (such as the new hypermarket in Lasnamäe, Tallinn) will be key in achieving this. Especially, since urbanisation and a decreasing population is a threat to its market leadership, which is currently powered by a rural domination.

The re-bannering will also support other areas already trading under the Coop name, including its private label ranges and the retailer’s grocery e-commerce platform which it intends to expand beyond the wider Tallinn area going forward.