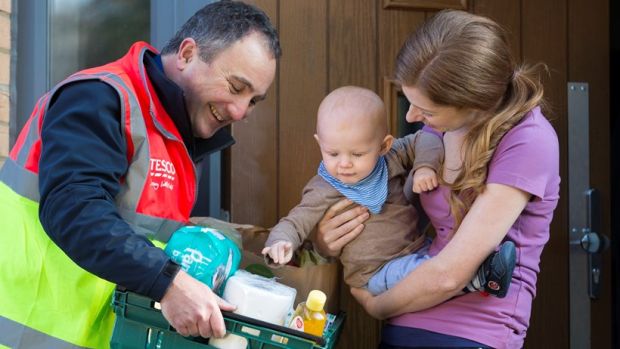 Tesco
Tesco will reach 99% of UK households with same day delivery from 300 stores.

Customers using the service must place their order by 13:00 for scheduled deliveries after 19:00 and pay a service fee of GBP3-8 (EUR3.66-9.76). The service will initially be offered for free to Tesco Delivery Saver members with monthly or annual online grocery passes.

The retailer says it has seen an 18% increase in demand for its same day delivery service so far this year, after introducing this to London and South East England in 2014.

The UK’s leading online grocery retailer is back in the game. Following a year of slow online growth, Tesco is working hard to defend its market leadership position in e-commerce, having spent the past year focused largely on its stores. According to LZ Retailytics estimates, Tesco’s online grocery growth rate in the UK fell dramatically from 11.22% in 2015 to 2.9% in 2016, representing a huge impact to suppliers. Yet, with more than GBP3bn (EUR 3.66bn) in online sales and more than double the market share of its closest competitor, its leading e-commerce position is one that’s worth defending.

In June the retailer launched Tesco Now, a one hour grocery delivery service to customers in Central London. Now it is rolling out same day delivery across the UK, in addition to same-day click & collect. It is a service with high appeal for shoppers, especially the time poor e.g. working parents. The main drawback of shopping online for groceries are those times when the fridge is empty and the next available delivery timeslot is frustratingly too late. Same day delivery fixes this problem. Great for the shopper, but why would a retailer want to take on the significant additional costs and last mile overheads?

The simple reason is Amazon. Firstly, because Amazon Fresh is now competing in the online grocery space, poised for expansion and with three same day delivery cut-offs now in London. Secondly, because Amazon’s emphasis on rapid delivery via Prime Now and Fresh has reset shopper expectations. Amazon’s superior service level has become the bar that all other retailers are measured against, and this is the service that shoppers have come to expect.

Shoppers using Tesco’s same day delivery services will be asked to pay a higher delivery fee to use the service; as they should. At the same time, there are newly introduced four-hour flexi saver slots with lower fees for customers who are willing to fit around Tesco’s schedule and maximise the quieter times of day. As the first retailer to introduce online grocery to the UK, Tesco has more experience than any other retailer. Yet now the expectation is that it has to provide a better, faster and more efficient service than ever before and at the same time balance service levels with profitability. Quite a significant challenge to logistics and infrastructure, but one that Tesco appears to be willing to take on. And now that both Tesco and Amazon are offering same-day delivery, the pressure on other retailers to follow will be even greater.