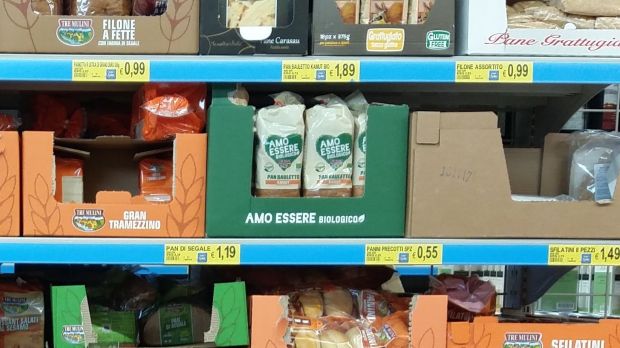 LZ Retailytics
Amo Essere Biologico was spotted by LZ Retailytics already in August this year, here with an organic bread found in the bakery product section.

This is the third addition to the 'Amo Essere' series after the retailer introduced ‘Amo Essere Senza Lattosio’ (free from lactose) and ‘Amo Essere Senza Glutine’ (free from gluten) by the end of 2015. Like the previous ranges the organic line also features a large heart on the packaging (green, this time), with the respective category label less noticeable underneath.

The arrival of the private label is supported by national commercials as well as a social media campaign featuring four well-known testimonials within the areas of cooking, nutrition, sustainability and training.

Italiafruit pictures also show how Eurospin co-merchandises the SKUs of the new line on a dedicated organic shelf, along with booths offering samples and brochures.

This is a late move by Eurospin, as several international and Italian discounters have featured organic lines for many years already. After the free-from ranges hit the shelves in 2015 we expected the discounter to launch an organic line next and even saw it as necessary, given the growing competition in the channel. Now it’s here and the packaging makes a nicely uniform and qualitative impression. The perfect tool for heralding a new, fresher Eurospin, just as modern as Lidl Italia.

The German giant and closest competitor in Italy gave up on its international Biotrend umbrella label in 2015 and instead added a ’Bio Organic’ label to each of its category specific lines, similarly to Eurospin’s strategy. Apart from countering Lidl’s uptrading process, Eurospin is likely also acting in anticipation of Aldi Süd’s market entry next year through its Austrian subsidiary Hofer. It knows all too well from Slovenia, Eurospin’s only foreign market, of Hofer’s commitment to organic private labels like ’Natur Aktiv’.

On the other hand it’s not only competitive pressure motivating Eurospin to launch added value lines like ‘Amo Essere’ or the vegetarian range ’Fior di Natura’ earlier this year. With a nationwide reach, the discounter simply won't be able to keep up its established expansion rate and has therefore begun to improve sales densities and margins of its existing store network.

These quality private labels are expected to assist in this. They could also enable the retailer to gain a stronger presence in major cities, areas where it currently is underrepresented. LZ Retailytics forecasts Eurospin to go from 1,162 to 1,320 stores in Italy 2017-2022, partly by adapting its concept to fit such new catchment areas.

LZ Retailytics subscribers can find insights about the strategies and performances of all Italian top discounters on our platform.