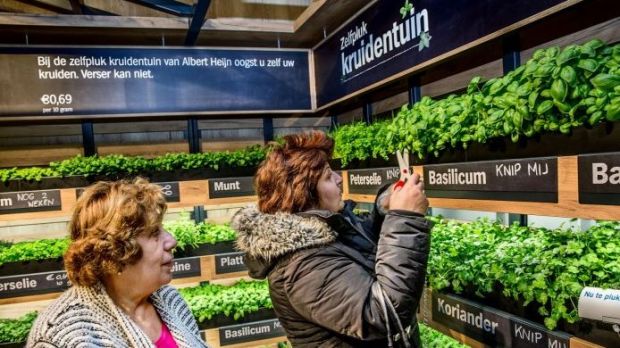 Albert Heijn
In the refurbished AH XL outlet in Purmerend, shoppers can pick herbs themselves in an instore mini-greenhouse.

Albert Heijn plans to (re)open three superstores under its AH XL banner by the end of the year. The first of these, the AH XL in Alkmaar in the north of Amsterdam, is to be reopened on 29 November. The store has been expanded and will be equipped with Scan & Go self-scanning facilities, a bakery café and a pick-your-own herb garden, Distrifood reports.

In December, the Ahold Delhaize operation also plans to open a refurbished XL store in Tilburg, in the south of the country, and a brand new superstore in Zaandam, the city where Ahold Delhaize’s headquarters are located. All of these stores will follow the retailer's new AH XL concept which was introduced last year in Purmerend. This flagship has a strong focus on sustainability and freshness.

Big boxes have never played a significant role in the Netherlands, a country of supermarkets that is nearing saturation as suitable store sites have become scarce. In particular the stores of market leader Albert Heijn can be found on every corner – but all of them are rather small in size. Even the very few existing big boxes do not exceed 6,000, and most not even 4,000 square metres.

For quite some time, we have not seen any notable dynamics in the development of Albert Heijn’s XL format. The stores have been part of the portfolio for ages but never really seen significant expansion. Exciting innovations took place instead at its convenience format AH To Go or at the aforementioned supermarket banner.

Times have changed, however, since Dutch #2, Jumbo, brought a new generation of big box grocery stores to the market. Inspired by players like Wegmans from the US, the Foodmarkt was born and with it a blueprint for many struggling hypermarket operators in continental western Europe. With foodservice elements, a marketplace atmosphere and the integration of food specialists, this might have been the spark setting the channel in the Netherlands on fire. And of course, market leader Albert Heijn has not only had the guts to let it burn, but now it is also adding fuel to it.

The Netherlands has never experienced no-frills price-aggressive big box formats comparable to Auchan or Kaufland. Instead, the retailers in the market directly jumped to a stage that many other European players are now desperately trying to achieve. The operation of places to meet and dwell. Stores with added value and a focus on fresh food, convenience and customer service. It is very likely that we will see more AH XL stores in the future, despite the expansion challenges within the market. With the three (re)openings the number of large stores in the network will increase to 39, and this will be a clear boost for the banner.