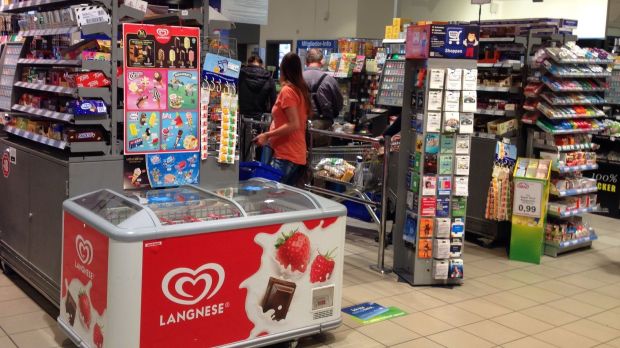 LZ Retailytics
A gloomy Sky? Rewe has decided to convert the Sky stores which it operates in a joint venture with Coop (DE) much faster than originally anticipated.

Rewe in Germany is accelerating the integration of the Sky stores from Coop (DE), Lebensmittel Zeitung reports. Due to an alleged investment backlog, Rewe Group’s eponymous supermarket division has decided to speed up the conversion of the supermarkets over which it gained control in late 2016. At that time, it entered a 55:45 joint venture with the North German co-operative Coop (DE).

Originally, Rewe was only allowed to convert the stores after two years, but with Coop (DE)’s consent the refurbishment has already started. According to Rewe Group CEO Lionel Souque, the joint venture named Supermärkte Nord Vertriebs-GmbH will be one of the group’s biggest challenges for 2018. Reportedly Rewe wants to invest far more than EUR100mn in the conversion which includes a broader fruit & veg offer, baking stations, new service counters and ESL (electronic shelf labels).

In five test stores, Rewe’s private labels have also found prominent places in the assortment. Coop (DE)’s own regional label Unser Norden (‘our north’), for which Rewe is bound to pay licence fees, can now be found in conjunction with the Rewe Regional logo on products.

It is always the stronger party of two that defines the perception of what has been going on. So, unsurprisingly, Rewe has reportedly accused Coop (DE) of not investing enough in its stores during 2016, claiming that the joint venture was “a real restructuring case which will also impact our profits negatively”. Of course, Rewe Group knew only too well the condition of the Coop stores at the time of entering the joint venture – particularly as both had been in a joint buying agreement for much longer. And back in 2009, Rewe had even taken over 39 supermarkets of the North Germany-based Coop situated in the very south of Germany, the former Coop Ulm.

Remarkably enough: back at the time of signing the Coop Ulm deal in September 2009, Lionel Souque, now the CEO of Rewe Group, told the press that Rewe wanted to continue evaluating opportunities for acquisitions if they made sense commercially and the stores fitted the existing network perfectly – which, he said, was ideally the case for Coop’s Sky stores. At that time, of course, Coop was happy to bolster its equity capital.

Objectively, even if Rewe may have invested too much money in taking the majority of the joint venture; and with its investment in a Sky store base that needs fundamental refurbishment to make the Skies brighter; the intention has always been clear: for Rewe to get its hands on the last remaining regional supermarket operators in Germany. It is part of the battle with Edeka, the number one German grocer. Major acquisitions are no longer legally viable. The cartel authorities finally stepped in, but that’s over and done with. Now, besides Edeka and Rewe, there is no other national supermarket operator left. On a regional level, there are still very few members of the Markant buying and service group around, but they are fighting hard not to be bought up.

Competition now unfolds between Edeka and its rival Rewe, with a focus on locations, services and food competence, especially among the independent shopkeepers. But also on a different front, between these two remaining supermarket operators and the leading discounters, namely Lidl and Aldi. They are gradually moving into the supermarkets’ territory: flaunting freshness, services, brands, promotions, inner-city locations – the buzz word is ‘supermarketisation’.

If you have to lock horns with an Edeka, Lidl and two Aldis at the same time, it makes sense to have a strong store base. It was said that Rewe wants to invest far more than EUR100mn in making the Sky stores brighter. This is fairly trivial compared with its overall budget of EUR2bn for this year.