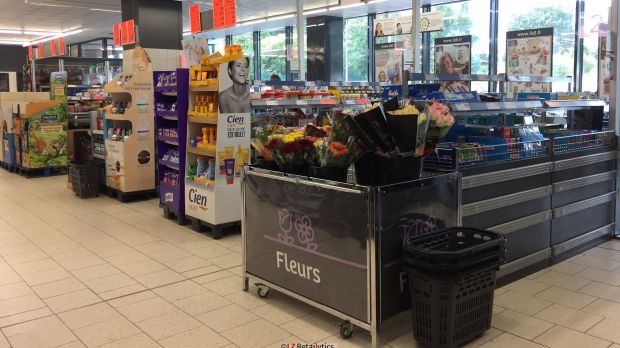 LZ Retailytics
At first glance, a more decent and unobtrusive colour scheme may belie the fact that - despite all claims of the opposite - Lidl still is and behaves like a discounter.

In a recent interview, Michel Biero, Member of the Board of Lidl France, provided an update on activities in the German discounter’s first and most important foreign market by revenue. “2017 was a very good year that surpassed our expectations, with nice double-digit growth”, he told French retail magazine LSA a few days before the end of the group’s financial year (28 February). “And we remain on course for 2018.”

Providing a sales figure for the very first time, he said that by 2016 Lidl France had already surpassed the EUR10bn mark. (This is in line with LZ Retailytics' sales calculation of EUR10.2bn for that year.) Biero didn’t comment on Lidl’s disputed profitability but said that “we are not making any changes to our investment.”

As for its assortment, Lidl is targeting families in particular, including those with babies; and indeed pets. The retailer has just launched a baby range nationwide, which is being promoted on the international domain lidl-baby.com. It is working together with the Blédina brand, offering some 50 products. Pet food has also been in the spotlight recently. “You can do simple things,” Biero said as he explains the rather basic approach.

Regarding the company’s store network, which has been oscillating around 1,500 stores for several years, Biero acknowledged that expansion has not yet been resumed as many outlets still need to undergo major refurbishments. “There is still around a year and a half of work to do.” He claimed that half of the network is state-of-the-art, while the other half has not yet been renovated. This includes some 200 “very old” stores between 600 and 800 square metres. To lead this, Lidl France has appointed a new Real Estate Director, Guillaume Calcoen, following the move of his predecessor to a post at Lidl USA.

Exactly as Schwarz Group is closing its financial books for the business year 2017/2018, the French crème de la crème for agricultural products, as well as the interested public, are meeting at the Salon International de l’Agriculture to meet and greet – and eat. Lidl is present again, but this year it has only one booth, compared with two last year – obviously the savings plan that the German headquarters (namely group CEO Klaus Gehrig) has proclaimed is making itself felt.

Michel Biero has used the opportunity to speak out, not only about its plans but also its wishes – for a ban on promotions on animal products including milk, pork and beef, in a far simpler way than planned by politicians – and even some sales promotions. (Did you know that Lidl’s food processor, Monsieur Cuisine, which competes with trendy Thermomix, was a big hit last Christmas?)

The Frenchman (who was born in a small town in Alsace that couldn’t sound more German even to a German’s ears – Krautergersheim – and that acclaims itself the ‘capital of sauerkraut’) does nothing to dispel the myth that Lidl itself established in 2012: that Lidl is no longer a discounter. Quite the contrary, at first glance, he nourishes the assumption by talking about organic foods, baby and cosmetics ranges, and much nicer stores. Oh yes, that’s part of the Supermarketisation trend – at discounters!

Looking more closely at what he says, his reasoning all follows the rationale of a discounter. Take the simple approach to promotional bans for agricultural products. The standardised approach to store architecture and layouts. The persistent holding onto aggressively priced private labels – which still account for 90% of the ranges! A narrow range of 1,700 SKUs – which has now even been overtaken by the guardian of discount virtues, Aldi, in some markets. “I don’t need 70% discount promotions to attract people to our stores,” he says, referring implicitly to brands that he deems overpriced just to allow for extreme discounts.

And there is still a strong volume orientation for the 75% made-in-France range – as Biero admits that he would like to drive the number of 650-700 own brand suppliers up even further, an undertaking that for many manufacturers founders on the production capacities.

‘No longer a (hard) discounter’, this has been Lidl France’s successful mantra - or smokescreen - to cast off the negative image of discounters in the public eye, among suppliers and employees, including potential employees alike. But it still behaves like a discounter – admittedly with some particularities and idiosyncrasies, in particular with elements of Supermarketisation. “We keep investing in communication,” Biero says, knowing that this is a field that Lidl has probably cultivated best.

No wonder that Biero, when asked whom he considers Lidl’s competitors today, mentioned hypermarket operator E. Leclerc, known for its aggressive price positioning. But what about Aldi Nord, you might wonder? “I’ve seen the new Aldi concept, and I say bravo, it’s brilliant!” - Brilliant, for Aldi’s shoppers that is? Or for Lidl?