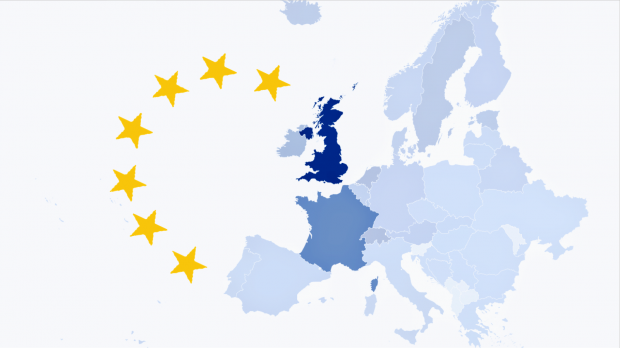 When comparing per capita grocery e-commerce sales data from LZ Retailytics for different European countries, the UK and France clearly tower above all other markets. In fact, the average Brit, Frenchman and Irishman together buy more groceries online than all the other average European citizens combined. More specifically, the sum of the forecast grocery e-commerce per capita turnover of the top 3 countries – UK, France and Ireland – seen in LZ Retailytic’s graph below, is EUR319. In comparison, adding the per capita sales across all of the other markets we cover in Europe, including Germany, Spain and Italy in the same way, they together only reach a combined value of EUR301.

Note that this only takes into consideration the grocery e-commerce operations of grocers generating over EUR500mn of turnover in the 40 European markets covered by LZ Retailytics. 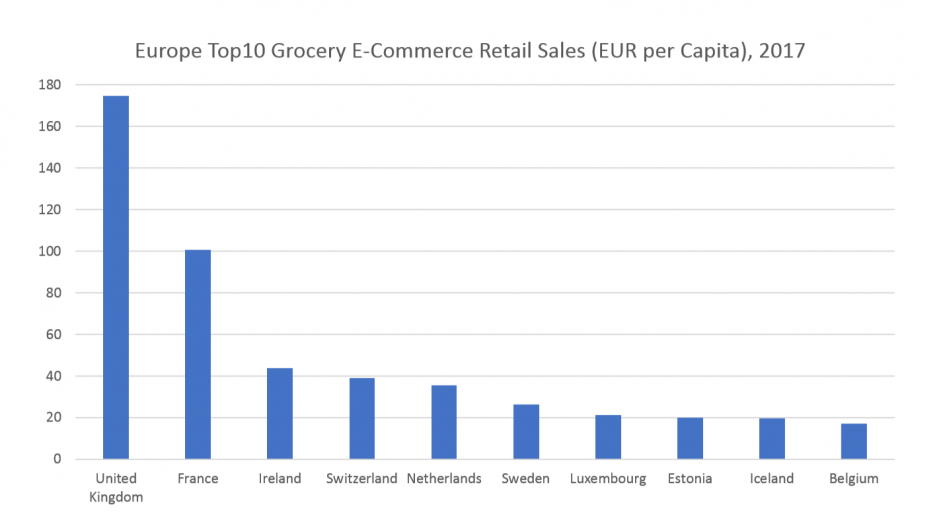 LZ Retailytics
Western Europe is over-represented in the Top10 ranking. The figures exclude grocers with a turnover below EUR500mn.

Noteworthy absentees from the top 10 online grocery markets in Europe include Central & Eastern Europe in general, as well as major Western European markets, such as Germany, Spain and Italy – which rank 13th, 17th and 20th respectively out of the 40 countries. Overall, the top ranking countries for E-Commerce are as you would expect, with the noticeable exceptions of Sweden, Estonia and Iceland. Still, the most interesting take-away remains how outstanding the UK and France are, even in a comparison taking population into consideration. Differences between the countries also show that it's possible for the grocery e-commerce channel to play a major role in markets with strongly varying structures.

In the UK, online grocery has been offered by major players such as Tesco, Sainsbury's and Asda for decades and it is seen as an essential part of their multichannel service offering. With online sales growing faster than those instore, the UK retailers continue to focus on the channel in response to the growth in demand. This year Tesco became the first UK retailer to offer same day home delivery and same day click & collect, with a service that will reach 90% of the UK population. Despite the profitability challenges associated with investing online, Tesco has cut overheads elsewhere in its operations in order to fund the service expansion as it chases volume growth. Meanwhile, Morrisons rolled out its online grocery delivery service in partnership with Ocado in 2014 and even Marks & Spencer has begun trialling online grocery for the first time recently.

In the Benelux, dense populations and a high number of stores per inhabitant have enabled retailers to successfully reach consumers with home delivery, despite the costly last mile. In France, a few densely urbanised areas and a predominance of hypermarkets have prompted retailers to favour click & collect as the main growth engine. Home delivery accounts for just 13% of online grocery sales, with the remainder being click & collect – either from a desk in store or at a Drive (car pick-up station).

In Iceland, grocery leader Hagar reaches the majority of the limited and Reykjavik-concentrated population through its Hagkaup online platform. In Estonia, four of the major grocers have launched e-grocery platforms available to the populous capital region of Harju and these competitors spur each other on to be the first one to expand to further major Estonian cities.

The same pattern can be seen in Sweden where the channel has had a sudden breakthrough amongst the large grocers in the last couple of years, where previously the pure online players were left unthreatened to grow. The hypermarket format dominates in the country and many Swedes have discovered the convenience of picking up their groceries after work, in exchange for a small fee. With the closest full assortment store often a car journey away, an increasing number are also willing to spend a trivial share of the wallet for home delivery, and all of the major grocers now offer such a service.

From these examples we can see that different markets have taken different approaches to respond to the interest and demand for grocery E-Commerce. LZ Retailytics subscribers can download their own customised grocery e-commerce rankings, going down to banner level; and see from our five year forecasts whether CEE, Germany, Italy and Spain will start to play catch up.