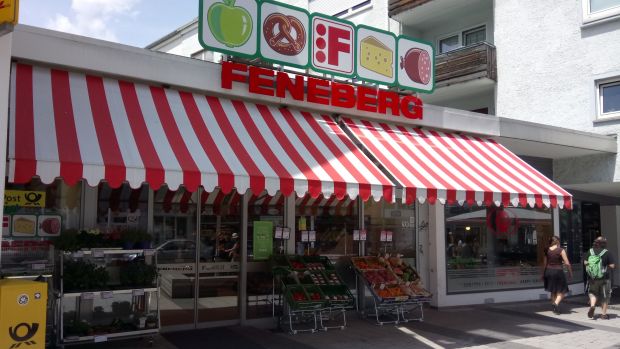 LZ Retailytics
Regional grocery player Feneberg has 76 supermarkets in the south of Germany - and is now a Prime Now partner for Amazon.

Amazon has added a regional grocer to its Prime Now express delivery service in Munich, Germany. The offer has been extended by 4,000 products from Kempten-based supermarket operator Feneberg, both companies said. Feneberg has 76 stores between Munich, Ulm and Lake Constance, in the very south of Germany. In addition, it operates Freshfoods.de, a grocery delivery service in Munich.

The Prime Now offer in the Bavarian capital has so far included shops from Basic organic foods, Bienen-Apotheke pharmacy and Kochhaus; in addition to Amazon’s own national food range which includes Tegut’s assortments. Amazon’s Prime Now service offers Prime members one-hour or two-hour delivery within the city and comprises a range of food and non-food items. In contrast, Amazon Fresh, which has not yet been introduced in Munich but is present in Berlin/Potsdam and Hamburg, provides a full range of groceries at competitive prices to Prime members for an additional monthly fee of EUR9.99.

31 July 2017
With total sales of EUR0.3bn, you do not even play in the regional but more in the local league in German grocery retail. If there was one, because there aren’t enough locals left to make a league. When you are the number 30 in the German ranking of grocers, like Feneberg, even the number 27 looks big to you. Number 27, that is your competitor Kaes, from a small town just some 30 or 40 kilometres away.

They know every village, every cow and farmer all too well. That's why both itch to expand their presence in nearby Munich, the German city where wealth meets the highest real estate prices. And where the factual supermarket duopoly of Edeka and Rewe share the reign following the break-up of Tengelmann's grocery empire.

And then there is Amazon. An American giant with ample aspirations in the same market. It is expected to launch its Fresh grocery delivery service any time soon. So, what do you do?

Of course, you try to team up with the one you think you cannot defeat, Amazon; and being Feneberg, you try to be the first before Kaes can do so. What Amazon’s press release didn’t say: Feneberg itself has a grocery delivery service in Munich, named Freshfoods. And by working with Amazon, it will also co-operate in fresh logistics. Both shops will now work in parallel – Prime customers can order on Amazon Prime Now; and all customers may order from Freshfoods.de. The latter’s offer is actually no less interesting than Amazon’s: while the obvious advantage of Prime Now is its rapid delivery, Feneberg’s online shop, which has its own refrigerated lorries, has not only a far broader range but is generally cheaper due to a more diverse range of private labels, from economy to regional. Prime Now benefits mostly from Feneberg’s FeBio organic and regional Von Hier products.

So, it seems that Freshfoods is not at all badly positioned, but partnering with the upcoming direct competitor Amazon Fresh. This raises the suspicion: is it meant to become Amazon Fresh soon – sooner rather than later? Is the current deal just the first step for a takeover, introducing Amazon Fresh via a partnership first? Feneberg may feel flattered but be coy. The retailer, like so many conservative family enterprises, is protective of its independence.

According to Managing Director Hannes Feneberg, the key advantage of the co-operation is the “steep learning curve” that is expected from the online joint venture. Generating shopper data and analysing shopper behaviour is key to the small retailer - and Amazon serves as its big brother. “How Amazon reacts to customer demands and tells us every day: This is working, this needs to be improved, we have to advance with these products – that’s the challenge,” Feneberg told Süddeutsche Zeitung.

As the few remaining, small regional retailers are still clinging to their independence, Amazon could become a viable alternative partner to the big Edekas and Rewes. And a possible leverage and bargaining chip when dealing and competing with the big national players. While the small ones have to fear being swallowed by Rewe & co, it is possible that Amazon is only interested in close partnerships rather than full ownership of regional retailers.

One who’s definitely watching the development with chagrin is Edeka, Germany’s biggest retailer and the buying partner for Feneberg. (Note that Feneberg sells Edeka products in its stores and on Freshfoods, and competes with Edeka's price aggressive Bringmeister in Munich – but definitely not on Prime Now.) Edeka – and particularly its co-operative owners in the region – will not be amused about the co-operation of its sourcing customer with the overseas giant, and it is not clear what consequences this may have should the move turn into a major success. Should the situation escalate, Edeka could look to terminate the buying agreement.

Since Rewe wouldn’t want to support Amazon partners either, Feneberg won't have many options other than to join Markant, an alliance which also includes Amazon’s recently found food partner, Swiss Migros’ Tegut. As grocery retail is all about buying power and economies of scale, Amazon is indirectly dependent on the membership of such an association to proceed successfully. But then, within Markant, discontent could also be mounting – especially from its largest members, which include Schwarz Group’s Kaufland. Just like Edeka and Rewe, Kaufland could want to penalise all those who support the foreign intruder Amazon, especially as it is also pursuing ambitious grocery e-commerce ambitions.

So, Amazon is behaving as the disruptor it has been declared to be, not yet that much on the consumer side (which is actually too early to assess for online groceries) but for the grocers’ strategic lineup. With Amazon, the combination of ‘international + regional’ has the potential to establish a counterbalance to the established system of ‘national’ grocers. Since neither Edeka nor Rewe show signs of collaborating with Amazon, Markant seems to be the beneficiary of Amazon’s ambitions via its partners – as long as the other Markant members let it happen. And the small retailers could stand the chance of remaining ‘independent’ companies – although fully dependent on one big distribution ‘partner’, which is Amazon.