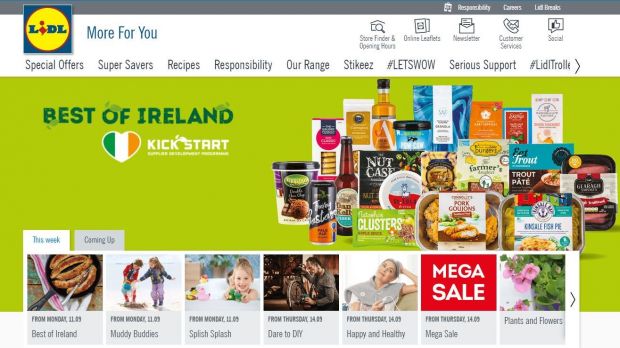 Lidl Ireland
The Best of Ireland campaign was developed in conjunction with Bord Bia to give food and drink manufacturers the opportunity to showcase their products at Lidl.

Aldi and Lidl are both increasing their commitment to the market in Ireland. A report prepared by the Centre for Economics and Business Research (CEBR) consultancy and published by Aldi shows that the retailer added more than EUR1bn to Ireland’s economy last year and that this figure will increase to EUR1.2bn annually by 2020 as the retailer expands its footprint, with plans to add 20 new stores by 2019.

Meanwhile, Schwarz Group’s Lidl has launched its first two-week Best of Ireland food promotion across its 129 stores in the country. The campaign was developed as part of a KickStart supplier programme in conjunction with Bord Bia to give food and drink manufacturers the opportunity to showcase their products at Lidl. The wide selection of Irish produced foods offered includes meat, burgers, gluten free meals, shellfish, cheeses, cereal, ice cream and locally brewed beer and cider.

Large international retailers are increasingly recognising the need to engage with shoppers at a local level and both these initiatives demonstrate the value that the German discounters place on the market in Ireland. No wonder, since both retailers are growing rapidly, with Lidl at number four and Aldi at number five position in our LZ Retailytics rankings, sharing around 21% market share. As both continue along their investment and expansion paths, by 2022 we can expect to see the two discounters closing the gap to Ireland’s number three, Tesco, with more than 11.9% market share apiece compared to 13.8% forecast for Tesco.

Despite being nothing new, localisation is proving an increasingly important consideration for large retailers wishing to enjoy continued success in their international markets. Aldi and Lidl have already done this for some time. Both portray themselves as local players in markets across the UK and Ireland, with local flags and an increasing emphasis on local products and sourcing. This trend recognises the fact that shoppers looking for value for money are no longer satisfied just with low prices, but at the same time they expect quality and variety. Local products are attractive and enhance shoppers’ emotional connection to a retail brand. This is something that the majority of retailers now consider highly important. Even US giant Amazon has successfully leveraged local online, with its Local Shops & Markets offer as part of Amazon Fresh.

Although only a promotion for now, there could perhaps be opportunities for Lidl to stock some of these more successful local lines in future. Meanwhile both retailers will certainly continue to roll out more stores in Ireland over the next five years, typically located close to larger rivals Musgrave, Dunnes and Tesco and continue to put pressure on the top market players.