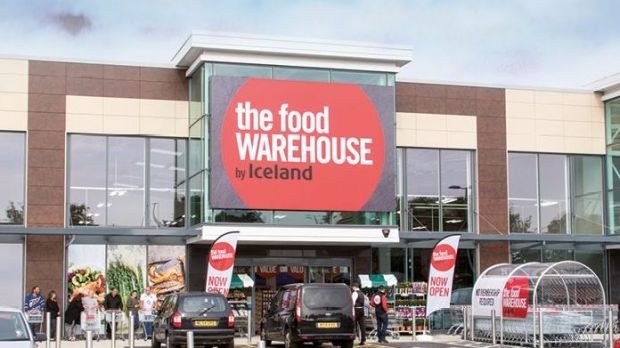 Frozen Food retailer Iceland has set a target of 400 stores for its larger format banner, The Food Warehouse, according to British grocery publication The Grocer. Previously, Iceland had said that it anticipated opening up to 25 of the format each year, but in this latest interview Richard Walker, MD of The Food Warehouse, said he expected it to now be closer to 30. The first of these stores, described by the retailer as “a cross between an Iceland and a Costco”, opened in 2014. There are now 52 stores in the UK trading under the banner, up from the 36 reported at the company’s financial year end in March.

The store footprints are also getting bigger. The first stores under the banner averaged around 1,000 sq m, but the retailer is now looking at stores of up to 1,900 sq m. Average store size for the core ‘Iceland’ banner is 455 sq m. Unlike core Iceland stores, which are typically located on the High Street, The Food Warehouse stores tend to be located at out-of-town retail parks, offering a broader range, including an extended selection of value bulk packs of ambient grocery items.

Opinion Going Against the Grain?

It is remarkable to report on a retailer who is seeing strong growth from its larger stores – and looking to increase the average size of these stores – against a backdrop of so many retailers who are currently looking to downsize their stores or drive growth through their smaller formats. Let’s not forget though that even its ‘large store’ format is relatively small compared to the stores of the UK major multiples at least, at around 1,200 sq m. In fact, as The Food Warehouse creeps towards stores of 1,500-1,900 sq m, the penny might well drop as to why this format is doing so well…. the stores are around the same size as those of Aldi and Lidl; a size which consumers report is easy to shop, offering as it does a pretty comprehensive range of categories but with a limited amount of choice, saving shoppers time as they don’t have so many decisions to make.

Caught between being a specialist (frozen food retailer) and a discounter, we think Iceland is on to something with The Food Warehouse. With its strong value perception and lack of wastage, frozen food is a category that over-indexes amongst lower demographic groups – and more broadly with those shoppers looking to save money on groceries, which is increasingly most of us. Offering a broader selection beyond frozen – including a comprehensive (and much improved) fresh range – removes the barrier of not being able to do a full shop. Meanwhile, the ‘case saver’ bulk packs tap into the ‘savvy shopper’ mentality and sparks the Costco comparison.

What about the aspiration for 400 Food Warehouse stores? It's early days, with only 52 stores to date, but so far Iceland has stuck to its aspiration of adding up to 25 stores a year – the retailer opened 24 stores under the banner during its last financial year; and has added a further 16 in the last 7 months. But even at a rate of 30 stores a year, it would take until 2029 to reach the target of 400 stores! Given we are talking about 12 years in the future, there are a great number of unknowns that cannot be predicted at this point: not least the availability of sites – particularly when targeting a similar sized store to the fastest growing retailers in the UK – and not forgetting the rise of e-commerce. At least Iceland also has its finger in that pie.