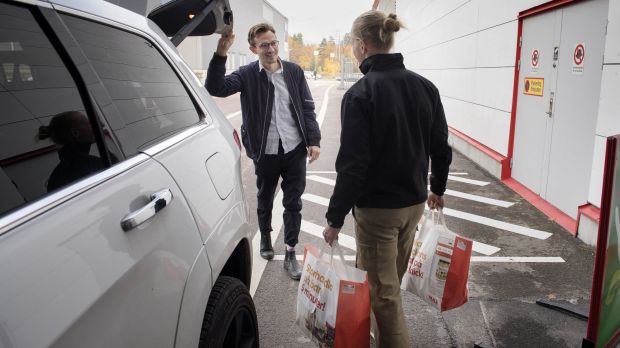 Ica Gruppen
All of the around 200 connected Ica stores offer click & collect and many also home delivery.

Ica Gruppen has disclosed a significant surge in the contribution of grocery e-commerce sales in its Q1 2017 report. Online sales accounted for approximately 2.5% of the total turnover of the ca. 200 connected Ica Gruppen stores in Sweden by the end of the first quarter this year. The corresponding figure for the Swedish grocery leader’s Apotek Hjärtat pharmacies was 2%.

Another noteworthy point from Ica Gruppen’s Q1 report was that the retailer has invested SEK9 million in the preparatory integration work for the acquisition of Iki in Lithuania, even though it hasn’t been approved by competition authorities yet. The retailer admitted that the surprising 7.8% like-for-like sales drop in the country was mainly due to increased competition from the newly opened Lidl stores.

Given that 150 of Ica Gruppen’s independent merchants had joined the grocery e-commerce platform by the end of 2015, we would expect that there are more than 200 by now. This highlights the common problem for a retailer managing a group of independent stores in getting everyone on board with new initiatives. Until more of the shopkeepers embrace the e-commerce platform, those shoppers who are looking to click & collect may well find the distance to the closest store offering the service to be inconvenient.

For those stores that have adopted the platform there has been a remarkable shift in the online sales share. This had reached 1% by the end of 2015 and 1.3% by the end of 2016, but the sudden hike to 2.5% shows a real Q1-2017 explosion in online sales. This is especially impressive given that more than half of the retailer’s hypermarkets are among the ca. 200 stores which currently sell groceries online. This growth might convince some of the owners of the remaining 1,100 stores to follow in the footsteps of their peers. Even if not immediately profitable, offering the service could win over shoppers from competitors Axfood and Coop Sverige who are still in the very early stages of offering click & collect.

Meanwhile, Ica Gruppen’s investment in Lithuania shows that the group is confident that it will be allowed to go through with the acquisition of Lithuania’s second largest grocer, Iki. This is indeed much needed in the country in order for Ica Gruppen to reach higher sales volumes and match the lower prices initiated by Lidl’s market entry. The weak like-for-like Q1 sales development reported by Ica shows this all too clearly and the retailer will doubtlessly be keen to turn this around.