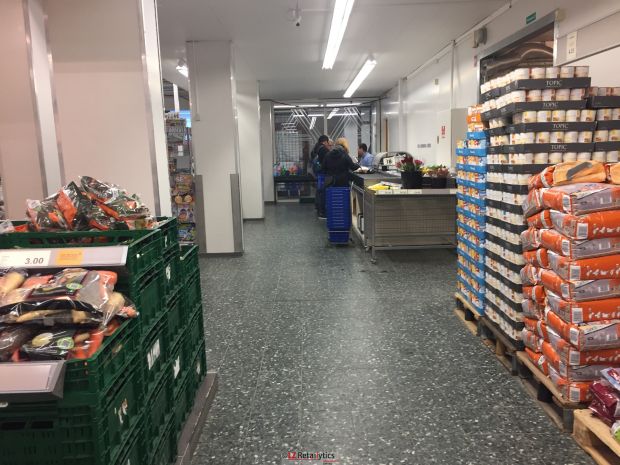 LZ Retailytics
Game over: This Aldi Nord store in the Danish town of Herlev is one of 32 outlets that will be shut down in the next weeks.

Aldi Nord is taking drastic measures at its Danish operations with plans to close 32 of its 220 stores. Meanwhile, a three-digit million DKK sum will be invested in a modernisation programme for 2017/2018 – the details of which will be announced shortly, the German discounter has said in a rare press release.

The move comes after repeated losses, which amounted to DKK243mn (EUR32.6mn) last year, on net sales of DKK3.66bn (EUR492mn). Sales climbed 2.5% on the previous year, while profits declined 18%. “We’ve understood that we need to provide a better shopping experience to our customers than before. Otherwise you are no longer a relevant discount chain,” said Aldi communication director Thomas Bang. For this reason old and outdated stores will be closed. “We still believe in our business concept: high quality, low prices, high responsibility,” Bang added.

“Aldi stays in Denmark.” That’s the title of a press release that Aldi Nord sent out in the country that it entered 40 years ago, but where it has been making considerable losses for several years. After all, it is closing one in seven of its stores – that is a store closure programme that hasn’t seen any parallel in the recent history of the world’s leading discounter. It only shows the urgency of Aldi Nord’s ongoing international rejuvenation initiative.

What has gone wrong? One may be inclined to believe that discounters don’t work in one of the world’s richest countries. But that’s obviously wrong. Denmark has, shortly behind wealthy Norway, one of the highest discount market shares and the highest density of discount stores in Europe. According to LZ Retailytics data for 2016, there were 277 discount stores per million Danes, far more than in Aldi’s and Lidl’s home market of Germany, with 198. So why doesn’t this work out for the world’s largest discounter, Aldi?

Well, the flipside is that there is enormous competition in the sector. This affects the average sales per discount store. They stand at EUR5.8mn in Denmark, which ranks 15th in Europe, far behind Finland, the UK, the Netherlands and Greece, for instance. Ireland takes the lead in terms of this indicator.

Aldi’s decision to close stores follows the general pattern in the Danish discount channel, with a number of store closures in the last couple of years. Its competitor Dagrofa recently decided to close all of its 103 remaining Kiwi discount stores. Coop Danmark’s Fakta chain counted 411 stores by the end of 2016, 35 less than in 2014 – and the retailer is in the process of revamping all of them.

Despite this, LZ Retailytics figures show that the channel as a whole achieved like-for-like growth of around 2% for both 2015 and 2016. The issue is not that Danes are abandoning discount, it’s that the high competition is putting pressure on margins. We know that Kiwi, Aldi Nord and Fakta have all been in the red in the last few years. All are therefore now trading up, by increasing store sizes and revamping their assortments.

Unlike Aldi’s old-school approach, most other discount players pursue rather soft discount strategies. Clearly the advantages of Aldi’s hard discount concept are usually in saving handling costs, streamlining processes and driving sales volumes per item. This  seems to be the crucial point: Aldi Nord in Denmark does not have these higher sales volumes. With EUR2.8mn gross sales per store, Aldi’s productivity this year will be breathtakingly lower than at market leading Netto, Rema 1000 and Lidl – all of which are in the range EUR8-9mn, LZ Retailytics forecasts show. Even Fakta and Kiwi fare better - pretty unusual to see Aldi being the least productive (in store turnover). Also by Aldi Nord’s internal standards, that’s the lowest turnover per store in all of its operating markets – with the exception of Poland, its only Central European country.

It seems that for too long Aldi Nord – unlike Aldi Süd and Lidl – has not looked to drive sales densities, but rather has only looked after costs. A dangerous game that is hard to change once costs have been reduced so much that there is nothing more to save. Aldi Nord’s rejuvenation activity started back in 2012, with major moves reaching Denmark in 2015. “Mit nye Aldi”, My new Aldi, is the new slogan, which promotes more well-known brands, more Danish products, more organic foods, more vegan and vegetarian food, as well as bake-off stations in most stores. Aldi Nord’s future strategy for Denmark will shortly be revealed, it was said. In our view, it will have to include much more than that.