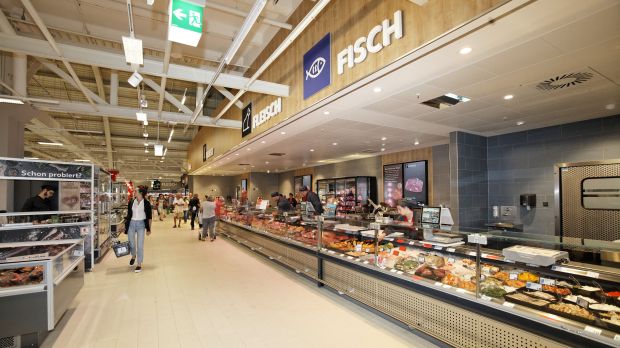 Kaufland has revealed further details regarding its German store refurbishment plans. According to Lebensmittel Zeitung, the big box operator plans to have completed the overhaul by 2020. By end-February 2018, the retailer intends to have finalised project ‘Facelift’, which comprises renovations that can be implemented quickly and easily. This will apply to the majority of its stores; the rest will see a more extensive revamp requiring an investment of EUR10mn per store. As reported earlier, the retailer intends to invest approximately EUR1bn annually on the refurbishment of its network, which currently consists of more than 650 stores in its home market.

The retailer has now opened one of the first superstores under its new concept, in Berlin. In the 4,000 square-metre outlet visited by Lebensmittel Zeitung, the shelves are lower and the aisles are wider, providing a better overview of the store. Kaufland has also developed a new customer guidance system with refreshed pictograms, the focus of which is on its instore bakery and service counters.

Kaufland is getting better at adapting to individual locations. The new outlet at Berlin’s tourist hot spot Alexanderplatz not only provides an instore sushi bar on its top floor; it also offers a large assortment of convenience goods; an antipasti counter; as well as bakery goods and cold drinks – which are all accessible via a short shopping route in the store’s basement. In addition, self-checkouts are used to help speed up the payment process.

In its Berlin store, Kaufland is also testing foodservice concessions Pasta Deli and Curry’s. This is part of the retailer’s international strategy to introduce this kind of service area next to its checkout zones. Following the introduction of the Foodcourt concept in Romania (as previously reported), it is now also being added to a first outlet in Poland. According to Wiadomosci Handlowe, the new store in Bielsko-Biala will be equipped with several foodservice specialists; a restaurant area with around 40 seats; and free Wi-Fi. We believe it will only be a matter of time before we will see the first Foodcourt stores in other markets. We would anticipate that the most likely market to be next on the list would be the Czech Republic.

This means, on an international and banner-wide level, Kaufland is getting swankier. With grey as the dominant colour, elements fitted in wood, restaurant areas – these are features that some shoppers will still have to get used to seeing in a Kaufland store. Kaufland is understood to be not only a big-box operator with a large assortment, but is also perceived as a price aggressive and thus affordable grocer – which seems to be highly appreciated particularly amongst its CEE shoppers. This could be one of the reasons behind Kaufland being the largest banner in terms of retail sales in half of the CEE countries in which it operates – in Bulgaria, Romania, as well as in the Czech Republic. The refurbishment of the network might be necessary, but Kaufland must be very careful not to lose this image and indeed shoppers’ trust. The retailer’s core strength needs to still be reflected in the new store concept to ensure that Kaufland doesn’t become just another Tesco in these markets.