AS Watson’s UK subsidiary Superdrug recorded a 41% jump in pre-tax profit during 2016 as it reaped the rewards of investing for the future. Superdrug’s profit reached GBP80.4mn (EUR98.11mn) and the retailer spent GBP33mn (EUR40.27mn) on store refurbishments and opened 23 new stores. Like-for-like revenues were up 7.8% during the period and online sales jumped 60%.

The company said that it had been a “strong year”, driven by categories such as cosmetics, which recorded a 14% sales lift to achieve market share of 30% for the first time. Its banana face powder was a top-selling product after being championed on social networks by celebrity Kim Kardashian. 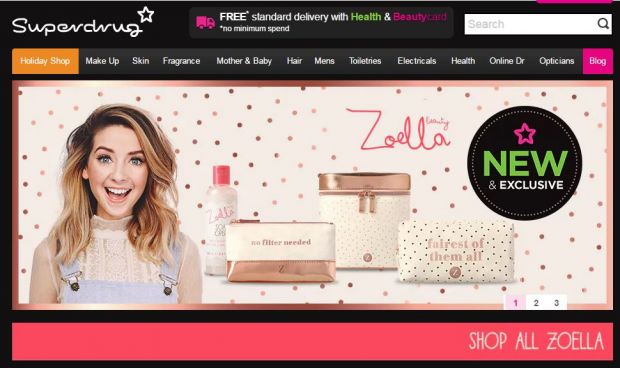 Superdrug
Changing weekly star buys and exclusive private label lines, such as this one with celebrity blogger Zoella, have differentiated the brand and driven sales growth.

Last year was a strong one for Superdrug, but it was no coincidence as it focused on modernisation of its stores, differentiation of its private label lines, loyalty and multichannel. This gave the UK’s second largest health & beauty retailer a strong arsenal against growing competition from online pureplayers and the growing number of grocery, discount and general merchandise retailers that are all expanding within the category.

In the UK AS Watson’s Superdrug banner is the second largest health & beauty specialist behind Boots. Both are owned by large corporations and both are benefiting from the security and investment that this has brought to their businesses. In Europe AS Watson has focused on reducing overheads over the past couple of years. It decision to close 45 underperforming Superdrug stores and convert a further 30 to the Savers discount banner appears to have paid off in terms of profitability. Nonetheless, Superdrug’s 7.8% like-for-like increase last year compares to around 4.4% for Boots according to LZ Retailytics estimates and this reflects the differentiation that Superdrug is injecting into its stores through renovations, trendy and exclusive private label lines and celebrity tie-ups. Endorsements from the likes of Kim Kardashian, changing weekly star buys and exclusive lines with YouTube blogger Zoella have all tapped into health & beauty trends and driven popular categories such as cosmetics.

Online has been a real strength too. Even from a relatively modest base, a 60% increase in sales is impressive. The retailer has invested into its online site over the past two years, and recently added an “online doctor” area, ideally suited to the online channel, which allows shoppers to purchase treatments for conditions such as hair loss and sexually transmitted infections.

As Walgreen Boots Alliance announced last week that it finalised its USD5.175bn (EUR4.68bn) agreement to purchase 2,186 US Rite Aid stores it will need to ensure that this does not distract its focus away from the UK market, where it faces growing competition from the UK’s number two.