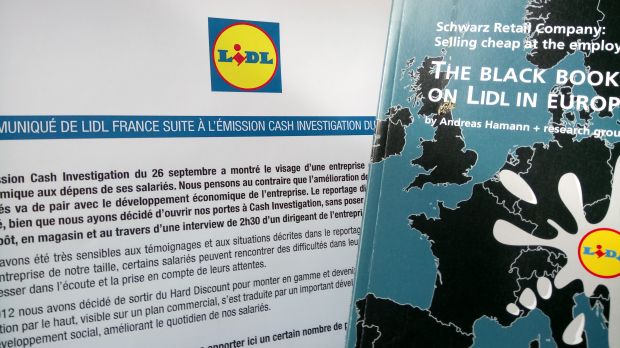 Lidl in France has come under serious attack for its working conditions. The TV documentary Cash Investigation on public broadcaster France 2 has reproached the Schwarz Group-owned discounter for poor treatment of employees; inappropriate behaviour of management; and work overload due to heavy lifting and caused by modern pick-by-voice systems. The allegations have culminated in the suicide of an employee at his work place.

The German discounter, who had given the TV team access to its premises without preconditions, reacted with a statement to the press addressing all the major points. It said it knew that it had “still some way to go”, but it thought that it had made some good progress since the transformation that started in 2012. “In 2012 we decided to leave Hard Discount behind to extend our ranges and become a neighbourhood supermarket,” Lidl said.

The statement that Lidl France sent out as a response to the allegations is all one can do in such a situation. Show yourself to be humble, perceptive, repentant and responsible. Penitent regarding the incidents that simply should not have happened; decisive regarding the disciplinary action of wrongdoings of managers; and sympathetic with regards to the facts that may be perceived as inappropriate, such as pick-by-voice – not without the careful attempt to explain that it is actually an industry standard.

What is a bit baffling is that in its statement, Lidl refers to 2012 three times – suggesting that since the launch of its official repositioning course things must have become better, or more precisely: having allegedly abandoned the hard discounter concept, things must have become better. But this would mean in turn, that if all this had happened in 2011, it would have been normal? Normal for Lidl, normal for a discounter? Going back in the fast-growing retailer’s turbulent history, the “Black Book on Lidl in Europe”, published more than 11 years ago by German trade union Verdi, collated alleged or real deficiencies in the discounter’s various international markets. Of course, Verdi had its own interests (to install union representatives), but we all know that Lidl wasn’t exactly a poster child in all terms staff-related. So, the improvements only started in 2012? We had thought it was before this!

The current case is no déjà-vu. It is an undeniable fact that working conditions at Lidl have improved enormously. This is surely related to several scandals, plus the fact that Lidl is now in a position that cannot be seriously challenged by any other retailer. It is easier to be generous when you see your profits flowing in than when you have to run after everyone to collect your modest income. This was different in the past; and therefore why Lidl has behaved differently in the past. Reproaches of bad treatment of staff will continue to turn up in a company that has some 400,000 European employees (across Lidl and Kaufland). But the decisive question is: are these isolated cases? Or is there a pattern? Despite all the fuss, the French case looks more like a collection of isolated incidents. This may be a relief, but shouldn’t hinder a responsible retailer from drawing learnings.

However, this may not apply to all allegations: As for accidents, the documentary quotes data from an internal survey by the Lidl works council. This shows explicitly that both frequency and severity of work accidents at the 'former discounter' have not only increased, especially since 2012, but are also several times that of competitors'! So, there is a pattern that needs to be addressed.