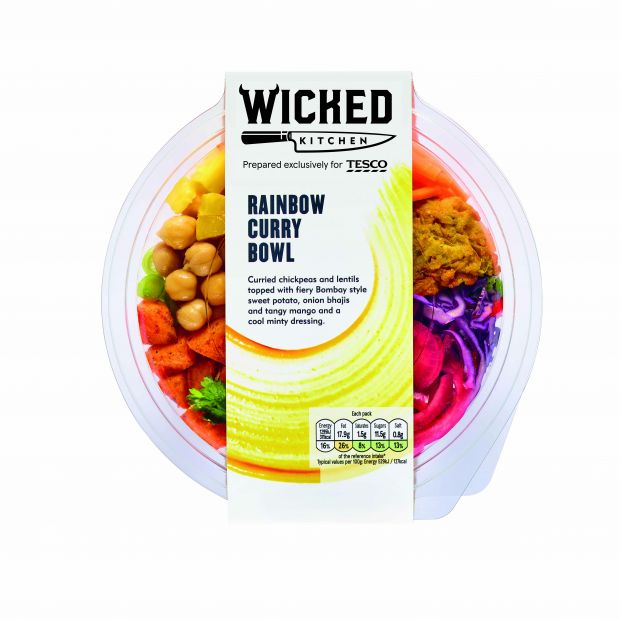 Tesco PLC
Tesco has unveiled a 20-strong plant-based range 'Wicked Kitchen', tapping into the increased uptake of veganism and flexitarianism in the UK.

The UK's leading grocery retailer Tesco has launched ‘Wicked Kitchen’, a range of 20 plant-based dishes. The assortment, which launched in 600 stores this week, comprises 11 ready meals and nine food-to-go options. The retailer has partnered with chef Derek Sarno, former Global Executive Chef for Whole Foods Market, who is now working as Executive Chef and Director of Plant-Based Innovation at Tesco PLC and developed the new range.

The retailer also offered its biggest ever vegan and vegetarian offering this Christmas, with a range that included two vegan Christmas dinner centrepieces, tapping into the increasing popularity of plant-based eating.

Vegans, vegetarians, flexitarians, flexible vegetarians, vegivores, meat reducers… these are all slightly different takes with a core central theme: reducing the amount of meat – and possibly dairy – that we are eating. The key motivations tend to be health, concerns about animal welfare and the environment. The increasing flexibility in approach has significantly increased uptake – with as many as a third of the UK population embracing ‘flexitarianism’ and consequently reducing the amount of meat that they eat, making it one of the biggest food trends for 2017. For Tesco, this has been reflected in a phenomenal 25% increase in their chilled vegetarian ready meals and meat substitutes – no wonder this is a trend that the UK’s biggest grocer wants to continue to leverage.

Tesco isn’t and won’t be the only retailer tapping into this trend, we’ve seen a number of retailers across Europe launching vegan ranges, most notably Coop Danmark and Casino in France. In some markets, veganism has been little more than a fad and has already been and gone, but due to this more flexible approach, it doesn’t feel like that will be the case in the UK. Tesco’s range looks tempting (arguably even to a meat eater) and also taps into the growth of food-to-go; plus it's backed by a ‘plant pushing’ heavyweight from Whole Foods – this feels like a well-conceived launch.

New Year is also the perfect time for the launch of new, healthier eating products. Sainsbury’s has also introduced a range of seven healthier vegetable alternatives to traditional meat products including ‘shroomdogs’  (sausages made with mushrooms), cauli burgers, shredded BBQ jackfruit and mushroom mince. Meanwhile Waitrose has introduced a new 'Good Health' label to its own-brand products to highlight items that are lower in fat, saturated fat, sugar and salt, in order to help shoppers make healthier choices. The retailer will add the label to items across categories from fresh produce, juices and smoothies to store cupboard essentials. It also plans to introduce new healthy foods under the new private label.

The trend for healthy eating at new year appears to have stepped up a gear this year, with the supermarkets battling it out to differentiate themselves and be the shopping location of choice.