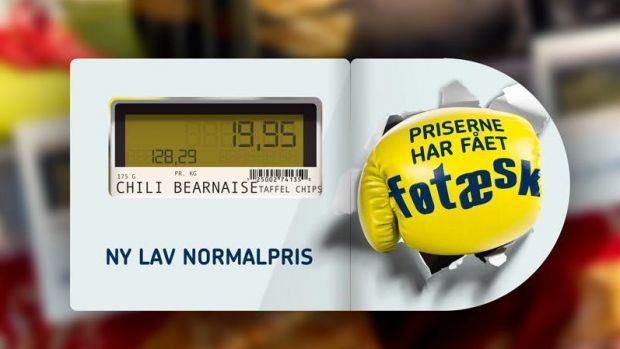 Dansk Supermarked
The products with adjusted prices will be highlighted in the shelf by a special shelf talker.

Denmark’s second largest grocer, Dansk Supermarked is to permanently decrease prices on 2,000 everyday items for its Føtex superstore banner. Starting tomorrow 350 SKUs will have their prices adjusted followed by hundreds of products each week until more than 2,000 items will be cheaper than before.

The initiative called føtæsk is designed to price match discounters in the market and comprises both private labels and brands, across all categories. The price adjusted products will be highlighted on the shelf by a special shelf talker displaying the campaign symbol (a boxing glove) and the text “New low normal price”.

Føtex's Banner Director, Thor Jørgensen told the Danish retail magazine, FødevareWatch, DKK250mn (EUR34mn) will be invested in the price reductions, financed by the retailer itself.

The initiative clearly shows Dansk Supermarked’s dissatisfaction with the development of its superstore banner in recent years. According to LZ Retailytics figures Føtex’s sales density dropped by 2.2% between 2014 and 2016. The banner has tried to maintain its quality positioning throughout that period and held out longer than the retailer’s Bilka hypermarkets. The latter already implemented price cuts on some 3,700 items accompanied by a new price promotion concept and a discount price matching promise.

Now it is Føtex's turn and the final incentive was likely upscale competitor Meny recently implementing its DiscountMatch concept. Like Meny, Føtex will now attempt the dual strategy of communicating both low prices and quality/assortment breadth. This is sure to impact margins in the short term, which shows the retailer’s conviction this is the way ahead for a non-discounter to gain market share in Denmark.

In fact, we recently got a first-hand view of Dansk Supermarked’s belief in the discount channel’s continued growth in the country. The company CEO Per Bank namely told Danish newspaper Finans that the retailer’s newest Netto discount concept already generated more turnover than expected in converted stores. He speculated this could lead to 600 Netto stores being operated in the country in the long run, adding around a hundred additional stores to the current network (not including unconverted Kiwi stores).

It remains to be seen how Coop Danmark will react to its competitors’ recent price focus. The market leader has previously been unwilling to succumb to the discounter rule in the country and instead advocates the expansion of the whole grocery retail industry by for example challenging the food service business and focusing on organic foods.