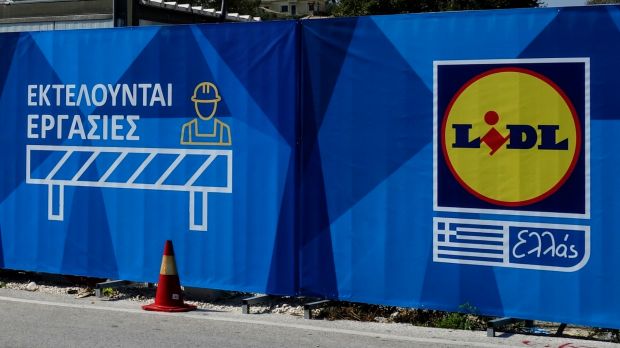 LZ Retailytics
Construction work in Greece: Lidl is moving into the city centres while rolling out its new, international store concept.

Lidl has disclosed plans to enter city centre locations in Greece. As reported by Greek magazine Self Service, the announcement of the Schwarz Group-owned discounter comes after the opening of the first such store in Athens, in Agios Dimitrios. This outlet covers 1,348 sq m stretched over two floors – allegedly Lidl’s only two-storey site in Europe – plus a car park with 84 spaces. In general, these urban stores will not be much smaller than conventional outlets, covering 900-1000 sq m as well as a car park; and they will offer the full range of 1,700 SKUs.

Alongside the urban launch, Lidl Greece has started the roll-out of the “new generation” store layout, as has been the case in other markets. For 2018, the German retailer has earmarked an investment of EUR85-100mn for Greece. This sum is understood to include store openings and refurbishments, as well as investment into its distribution network. A new warehouse is expected to be announced this year, according to the paper; and expansions are planned for its Greek as well as Cypriot warehouses.

Lidl’s position in Greece is exceptional in many regards. The country’s grocery retail scene has changed dramatically over the past three or four years, as is shown by the LZ Retailytics database. The Top 3 of 2014 consisted of Delhaize Group, followed by Carrefour Marinopoulos and Sklavenitis. Number four was Lidl. By 2017, however, these positions had changed: Sklavenitis had become the number one, thanks to the integration of the former Carrefour franchisee Marinopoulos. Second now is Ahold Delhaize (after the merger of Delhaize Group with Ahold). Lidl, meanwhile has risen to the number three ranking.

A strengthened Sklavenitis with sales at nearly double the level of Lidl, surely is not good news for the latter. Particularly as Sklavenitis is making price aggressive moves, especially in its hypermarkets. But it is expected that the integration of Marinopoulos will still take its toll. Lidl, meanwhile was in the hitherto unprecedented situation of integrating the store network of its arch-rival Aldi Süd, which exited the market in 2010, a task that is understood to be completed. Still noteworthy, however, is the fact that Lidl’s network hasn’t seen any significant extensions for several years, oscillating around 220 stores.

This is set to change with the announcement of three new outlets for 2018 and four for 2019. Which will be followed by the move into the urban centres – because it is Athens and Thessaloniki where the more affluent shoppers are. Obviously, so far, expansion yielded precedence to improving productivity. And productivity is high, by both international and Greek standards. With average sales per store of EUR7.4mn in 2017, the country was mid-table among the discounter’s 27 markets, while it performed better than Lidl Spain and the (admittedly weak) operations in affluent Austria. Within the Greek retail scene, only Sklavenitis topped Lidl’s performance, thanks to its hypermarkets. (However, on the other hand, the turnover of two Lidl stores exceeded that of a Sklavenitis hypermarket in 2017, according to LZ Retailytics data.)

Lidl is the only discounter in the country. The concept is unique in Greece. This does not only apply to the discount features such as a limited product range and streamlined processes, but also in terms of the product assortment. Lidl has the private label advantage. The share of private label sales stands at roughly 15% in Greece, albeit declining due to the promotional activities of brands which account for the other 85%. The situation is very much the opposite at the discounter, where Lidl’s own brands cover 85% of ranges (not necessarily sales). While this may still limit its popularity amongst conservative shoppers, this allows for a USP not only in terms of aggressive price positioning, but also for range development.

It is remarkable that on 1st January Lidl started a new advertising campaign in Portugal claiming that it is the international retailer’s “unique and exclusive products” that make people go there for the first time – and also converts them into regular shoppers. The campaign, “Do you see a reason to go to Lidl?”, mostly highlights imported private label products such as Milbona Skyr yoghurt, Chef Select lasagna, Fin Carré chocolates and Cien Q10 cream – products that have long proved popular in other countries. Often the discounters have been criticised for imposing unknown foreign products on the local population. But obviously it is the right mix of interesting imported food specialities and (surely a majority of) home-grown products that makes shopping there interesting.

As a foreign retailer – especially one coming from a country that has been in severe disputes with Greece about the financial and political measures to be taken in the crisis-struck country – Lidl tries to declare its contribution to the national industry. It had 2,893 Greek suppliers in 2016, 59% more than in 2015. These accounted for 61% of the money spent on goods, versus 56% the year before. Lidl contributed 0.37% to the GDP in 2016. By 2022, Lidl won’t have climbed up the retailer ranking any further than its current 3rd place. But certainly, it will have steadily expanded its market share, climbing from 10.5% in 2014 to 14.8% in 2022. Not too bad. 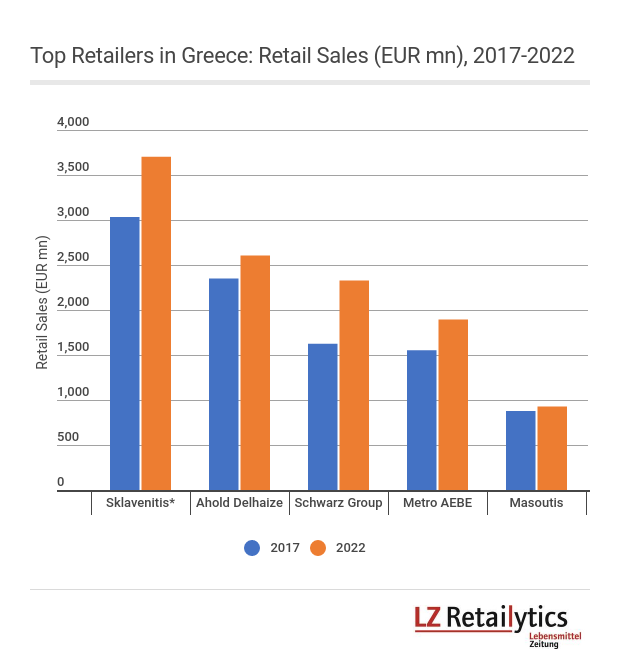 LZ Retailytics
*Sklavenitis' sales include the retail activities of Carrefour Marinopoulos and its franchisees, taken over in 2017.