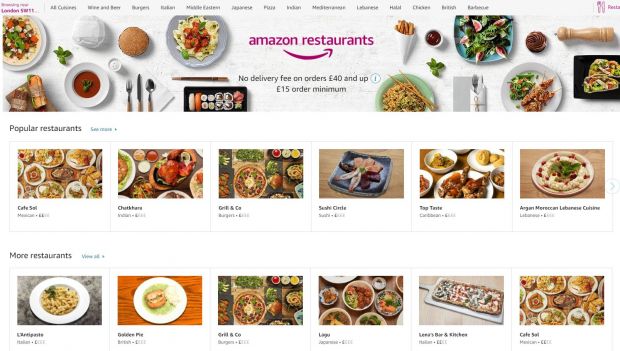 Amazon UK
Amazon already delivers restaurant takeaways as part of its Prime Now 1-2 hour service in Europe. Could recipe boxes be next?

Amazon has trademarked a new recipe box service in the US, leading to speculation that it could add this to its grocery and restaurant delivery services in future.

The service has been trademarked under the tagline “We do the prep. You be the chef.” According to the documents filed it covers “Prepared food kits composed of meat, poultry, fish, seafood, fruit and / or vegetables and also including sauces or seasonings, ready for cooking and assembly as a meal”. It also covers advertising, business management for retail and online retail stores, customer loyalty rewards programmes and loyalty coupons for frequent use.

Recipe boxes are a trend that appears to be here to stay. Already in the Nordics for around a decade, they are growing in popularity in the US and markets across Europe, including the UK, France and Germany. Carrefour in France and Waitrose in the UK are among the latest retailers to add recipe box services to their online propositions, tapping into the growing demand for inspiration and healthy meal solutions from busy young professionals and working families. This demographic is influential, as they are wealthier than other shoppers and also mainly the same customers that shop for groceries online.

So what does Amazon stepping into the online recipe box arena mean? Well, so far it has only registered a trademark and only in the US. So there is no guarantee that it will launch the service, nor that it will come to Europe anytime soon. In order to be successful Amazon will need to convince shoppers of its grocery credentials, as the success of the venture will surely be judged by customers on the quality of the product and the selection of meals available. For Amazon this is an effort that is ongoing via Amazon Fresh and Prime Now, but it will certainly be boosted by its planned acquisition of Whole Foods, which adds a high quality potential supplier to the mix.

Recipe boxes are largely marketed on a subscription basis, with successful companies such as Germany’s Hello Fresh typically encouraging customers to sign up to multiple meals per week for families of two or four people. This type of model fits very well with Amazon’s already hugely successful Prime membership scheme. Further, the online giant could leverage its superior rapid delivery network to offer recipe boxes within 1-2 hours via Prime Now, or within 15 minutes via Amazon Fresh PickUp and this could prove extremely convenient and popular.

For now this remains just a trademark, but it appears that Amazon is tapping into a trend that will be around for a while. Getting the product right will be key, but if it does so, Amazon’s superior logistics, service levels and loyalty initiatives could make it a future recipe for success, both in the US and across its major international markets.