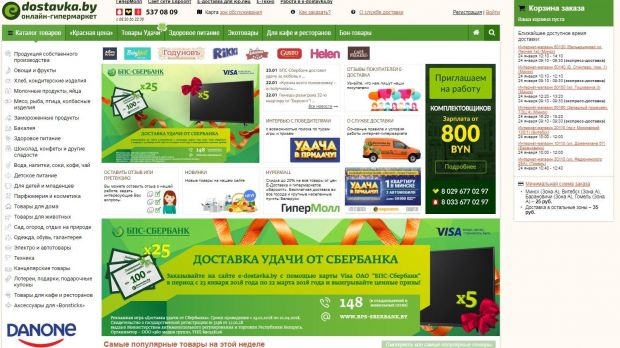 Eurotorg
Having abandoned its Russian online operations in 2016, Belarusian Eurotorg is now planning to try again at establishing a foothold in Moscow.

Belarusian privately-owned market leader Eurotorg plans to re-establish its e-commerce business in Russia. As news portal Kommersant quotes Andrey Matyavin, Board Member of Eurotorg, the company’s online banner E-Dostavka will initially be available in Moscow, with a roll-out to other major cities planned in the medium term.

To set up its online business, Eurotorg is looking for a strategic partner, to help shoulder the anticipated USD50-80mn investment, which is intended to establish ten  warehouses sized at a total of 80-100k sq m. The retailer plans to reach break-even point within two years, aiming at monthly revenues of USD25-30mn.

Opinion Shaking up the Market

Eurotorg’s second attempt to reach the Russian capital with its grocery e-commerce arm within just two years is daring, but inspiring. The first try was cut short due to the vast devaluation of the Belarusian currency towards the Russian rouble, and the operation was consequently abandoned in 2016 after just a short period.

A quick look at a map of Europe shows the distance from Minsk to Moscow, which is around 700km. Even if one takes into account the 30+ stores of its Russian subsidiary located in Smolensk and neighbouring cities – halving the distance – Eurotorg’s latest experiment would give a totally new meaning to the expression ‘last mile’. What has induced the Belarusian top player to undertake an enterprise that was thus far reserved only for premium retailers such as Azbuka Vkusa, and that even X5 and Okey have been testing only tentatively?

Eurotorg’s online push into the much larger neighbouring Russian market should be a wake-up call for all Russian grocers. Instead of using hypermarkets and in-store picking as a business model, the market leader from the small neighbouring country is planning hypermarket-sized dark stores as a logistics base, right from the start. And if it comes to life as quickly as planned, the scale will dwarf the online operations of the existing federal retailers.

However, we are only cautiously optimistic regarding the financial targets that Eurotorg has set. Revenues of USD300mn per year for an online grocery banner feels on the high side and at this point is possibly unfathomable for Russian players, whose existing e-commerce operations – according to LZ Retailytics data – have typically reached turnover of between USD10mn and USD30mn in 2017.

Nevertheless, Eurotorg’s buying partnership and cooperation for private label production with Lenta, combined with a rise in favour for Belarusian products in Russia following the 2014 import ban, might pave the way for a successful revival of E-Dostavka. The delivery service seems to be remembered fondly by many Moscovites, judging from the many blog posts originating in the Russian capital.

If we also consider that Moscow and the Moscow region together comprise twice as many inhabitants as Belarus has – that is around 20 million – with an average monthly income of USD1,030 compared to USD375 on average for Belarus (2016 statistics), this  latest move may materialise as a well-thought through plan and a chance to offer Belarusian products as a monopolist in a niche market.