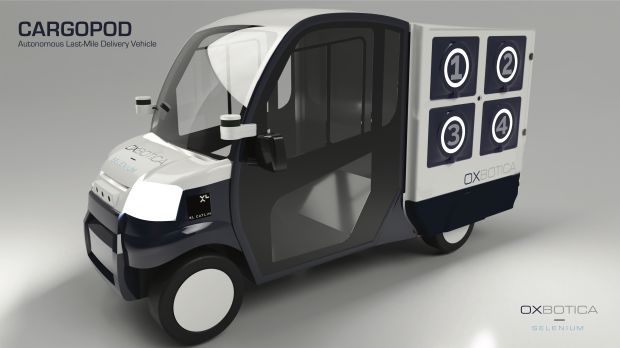 Oxbotica
Oxbotica's cargo pods have eight compartments for groceries, which light up on arrival at their destination.

Ocado is set to take part in a driverless vehicle trial later this year in a bid to improve safety and achieve faster deliveries. According to The Grocer, Ocado will team up with Artificial Intelligence company Oxbotica using newly designed ‘cargo pods’.

The pods feature eight individual loading compartments, which light up on arrival to indicate where the order is located. Although Ocado did not give a date for the trial, it is expected that the new pods will be ready to commence testing over the summer in London. Tech company Oxbotica is already testing other driverless vehicles to carry passengers in two UK government-backed trials.

Opinion Who Will Win the Last Mile Race?

Amazon is testing drones, Tesco just delivered groceries by robot and now Ocado is working to pilot driverless vehicle deliveries. The aim is clear, to deliver items to shoppers faster, more efficiently and to reduce the overheads of last mile delivery. But who will win the race?

The use of driverless vehicles is certainly an interesting trial and one that seems to have perhaps bigger potential than drones, at least as far as groceries are concerned. However, the worry for shoppers may be that they would need to unpack their own orders from the vans on arrival, which could for some be a disincentive, particularly for anyone elderly or disabled.

For now though, Ocado’s trial appears to be less about cost savings and more about testing new technology.  Ocado’s Chief Technology Officer Paul Clarke said whilst the vehicles were capable of operating without a driver, for the foreseeable future humans would remain present to help customers carry their shopping. However, with computers taking on much of the driving work, the company could make routing more efficient and allow the staff to focus on customer service.