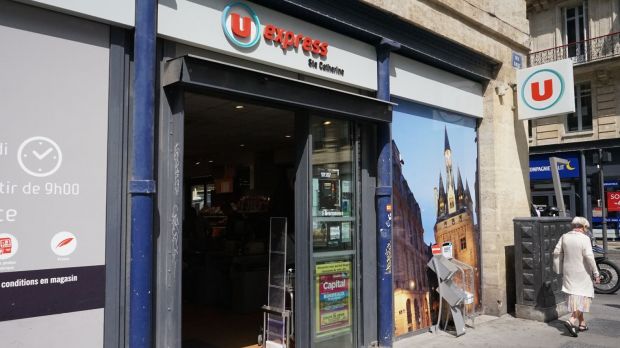 LZ Retailytics
Système U operated 344 U Express compact supermarkets and 392 Utile minimarkets in France in 2016.

By the end of this year, Cooperative Système U is expected to overtake Auchan as the fifth largest retailer in France, in terms of market share, LZ Retailytics data shows.

Large supermarket operator Système U has enjoyed good momentum, thanks to new openings, combined with the enlargement of some existing stores. Meanwhile, Auchan has been at pains since 2013, with sales losing ground - particularly due to ailing hypermarket non-food performance. The strategic refocusing on the core format has translated into the divestment of several non-food banners including Grosbill electronics, Little Extra household accessories and Alinéa furniture stores during the period, accentuating the drop in LZ Retailytics market share. 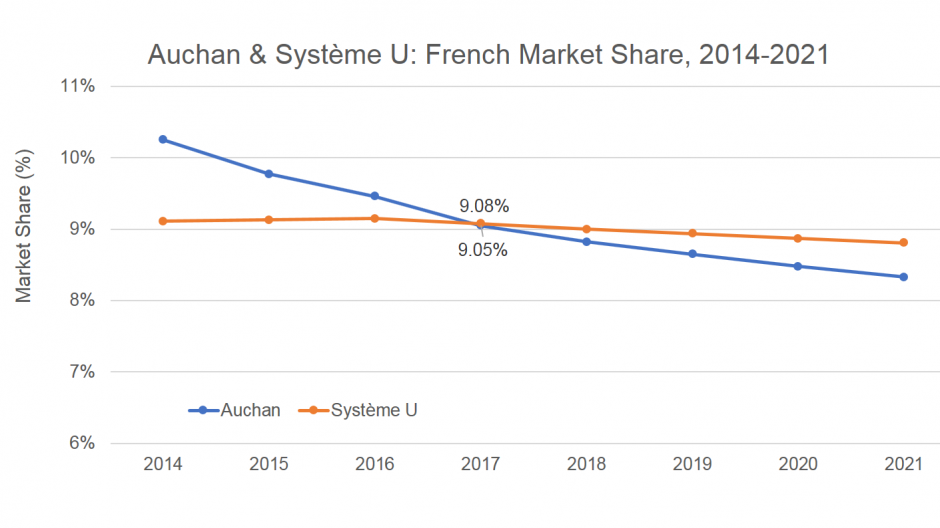 LZ Retailytics
Our Market Shares are defined as the percentage of the Retailer’s Retail Sales within the total of this country’s share of the LZ Retailytics Universe.

The full market shares of 20 Grocers operating in France as well as thousands of other data points and customised reports relating to the retail industry across all of Europe are available to LZ Retailytics subscribers.

Market Share rankings are merely symbolic since both retailers have been shoulder to shoulder for some time; and operate within the same buying group. Furthermore, the end-of-year festive purchasing boost could play in favour of Auchan and its big boxes, temporarily postponing the inevitable. This nonetheless give LZ Retailytics the occasion to provide a picture of the dynamics at play in France and a scenario as to how the trend will continue going forward.

We anticipate Auchan will stem its sales decline thanks to the efforts already underway to turn its business around. Even so, new openings appear relatively limited for the hypermarket operator beyond a handful of superstores, given the saturation of the French market. The retailer also has its mind set on refurbishing existing stores and rolling out its new single brand strategy. The latter may benefit its smaller formats, but is unlikely to be of great help for its core business: the large hypermarkets. These remain under pressure from the competition, as well as their heavy reliance on ailing non-food sales due to the growth of e-commerce in general. These factors lead us to believe that Auchan will underperform the market, resulting in a sliding market share.

In contrast, Système U with France as its sole focus; and its core format of large supermarkets which are preferred by consumers, is expected to continue to deliver; although it can expect to face challenges of its own. In a crowded market, attracting new shopkeepers into the cooperative becomes a tedious task, especially as Système U remains much smaller than the other store-owner cooperatives in France: Les Mousquetaires Intermarché and E.Leclerc. Worse still, the competition is regularly poaching from within its ranks, which has hampered – and will likely continue to hamper – top line growth in the future. While we observe that Système U is quite dynamic in terms of minimarket openings, it appears to be falling behind the expansion guidelines previously announced up to 2022, particularly for larger formats.

Système U stepping up in the ranking is partially thanks to its growth momentum; and largely due to Auchan’s own struggles. Going forward, we feel the challenge for Système U will be to defend its market share as LZ Retailytics anticipates strong momentum coming from a wide variety of competitors: from hypermarket operator E.Leclerc and its non-food diversification strategy; discounter Lidl's 'supermarketisation'; the increasing relevance of general merchandise websites such as Amazon and to a lesser extent Casino's Cdiscount; as well as rapidly expanding food specialists such as Grand Frais and Biocoop organic stores, among others.