LZ Retailytics
Through its hypermarkets and its dedicated organic private label line "Village Bio", E. Leclerc is already one of the top sellers of organic products in France.

French retailer E.Leclerc announced that it intends to open 200 organic stores in France within the next five years. E. Leclerc has established a dedicated organisation and purchasing office for these organic stores. The final name of the banner is yet unclear, but the retailer has registered two brands "Le Village du Bio" (Organic Village), similar to its private label line for organic products; or "Le Marché Bio Leclerc" (Organic Market Leclerc).

The stores will have a similar offering and ethics to leading organic specialists, despite some initial difficulties. E. Leclerc CEO stated on France Inter radio, "some suppliers selling to Biocoop or Bio C Bon have been too comfortable in their exclusive niche of organic products sold at a high price and do not want to be linked to E.Leclerc".

Opinion Stepping into the Breach

Already a leader through its traditional channels for organic sales in France, E.Leclerc lags behind the competition for organic specialty stores. French hypermarket rivals have already inaugurated a handful of dedicated stores, such as Carrefour Bio, for instance. Other French retailer have resorted to acquisitions to rapidly gain footprint and expertise in the segment.

Groupe Casino ran ahead of the pack and took over the Naturalia banner a decade ago, before gearing up its expansion to 168 stores in 2017, LZ Retailytics data shows. More recently, Carrefour acquired the online organic specialist Greenweez. In contrast, Les Mousquetaires Intermarché adopted a different strategy, taking a minority stake in organic store cooperative Les Comptoirs de la Bio (with an estimated turnover of EUR220mn in 2016).

The store-owner cooperative E.Leclerc is merely giving an official concept framework to trials initiated by several of its members over recent years. The uncertainty regarding the actual name of the banner seems to indicate that the retailer rushed to catch the wave of press publicity created by the French National Food Conference around fairer and healthier food practices. Compared with the competition, the target of 40 stores annually seems to us (too) ambitious. 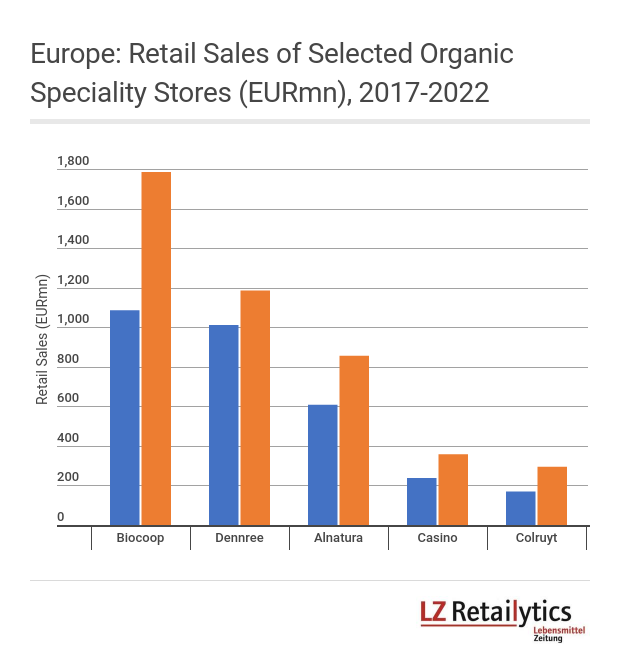 LZ Retailytics
In Europe, the organic segment remains vastly in the hands of small and mid-sized operators, with a handful of operators above EUR500mn turnover (French retailer Biocoop or German Alnatura and Dennree). Only a few traditional retailers operate dedicated organic store chains, foremost of which Groupe Casino (Naturalia) or Colruyt (Bio-Planet).