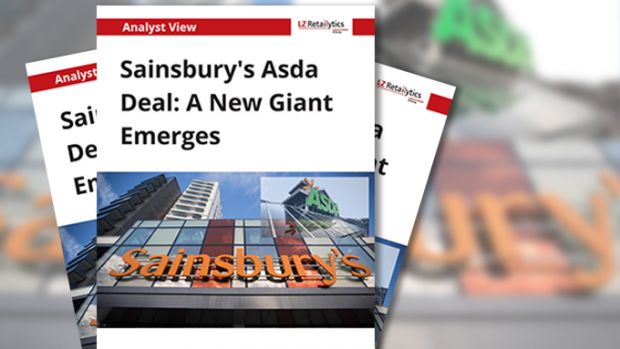 LZ Retailytics
Sainsbury’s proposed merger with Asda is the biggest takeover in UK food retailing. If it goes ahead, Sainsbury’s would become #6 in Europe and create a UK duopoly with Tesco. To us, the move also signals the start of a European exit for Walmart.

Sainsbury’s proposed merger with rival Asda is set to be the biggest takeover in UK food retailing. If it goes ahead, the UK Big Four would become a duopoly, creating a new Sainsbury’s even bigger than Tesco, with 23.4% market share to Tesco’s 21.5%, according to LZ Retailytics data. Sainsbury’s would become #6 in Europe and leave national players such as Morrisons trailing in its wake.

To us, the move also signals the beginning of Walmart’s market exit from Europe, where its UK business has become its international problem child. Despite maintaining two brand identities, the day to day running of operations would be largely left to majority shareholder Sainsbury’s, which stands to future-proof its business and gain scale to battle a resurgent Tesco, Amazon and the discounters.

The market forces driving this UK consolidation are clear and Tesco just lit a fire with its acquisition of Booker. But no one expected a takeover on this scale, least of all suppliers, who are likely to feel the squeeze.