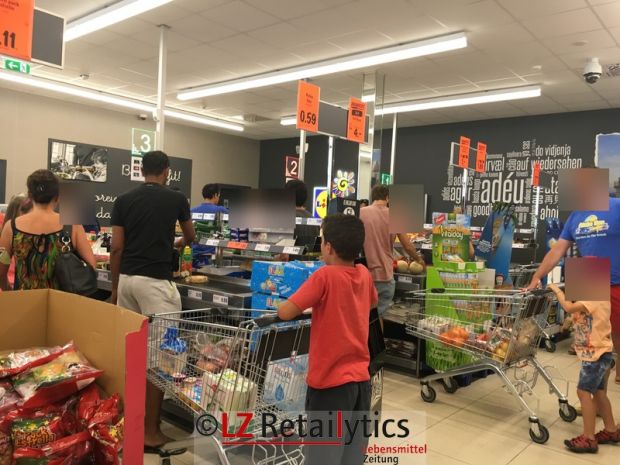 LZ Retailytics
Lidl sees potential for up to 850 stores in Spain - up from 540 at the moment.

Lidl ended its 2016 financial year in Spain with sales growth nearing double-digits, the country management has disclosed at a press conference. The Schwarz Group-owned discounter posted net sales of EUR3.335bn in the financial year ended 28 February 2017 – an increase of 9.4% vs. the previous year. The total net number of stores grew only slightly to 540 outlets, as the 39 openings included store replacements and refurbishments. Profits have not been disclosed, but will likely be higher than the EUR104mn achieved in 2015.

Lidl invested a record EUR368mn in the 2016 financial year; which will be followed by EUR300mn this year, according to Financial Director Ferrán Figueras. The primary aim is to roll out the new store concept in the country and open new outlets. The management sees room for up to “800 to 850 stores”, according to El País newspaper. Acquisitions would not be ruled out if the opportunity arises, however group policy remains organic growth.

As in previous years, Lidl Spain has put a strong emphasis on sustainability. For the discounter this includes a high percentage of “locally” (which means nationally) sourced goods, as the number of Spanish producers climbed 8% to 650. Lidl has also increased the minimum wage for company employees, which it claims is the highest in the industry.

Opinion Busy as a Bee

As Lidl lets off the fireworks in Spain again – it discloses more information than in any of its other countries of operation – the first figure that surprises is the lower investment budget for the current year. As an observer, one is used to ever-growing sums of money, after all. There may be two explanations for this. First, the decision by Schwarz Group boss Klaus Gehrig earlier this year to step on the brakes in terms of spending – the new Lidl concept had reportedly become too posh and expensive in his eyes, resulting in the dismissal of the Lidl boss. Secondly, the imminent launch of Lidl in the USA – a venture that will most definitely devour huge sums that will therefore no longer be available for the European operations. (In general, this is an open question: What will the US venture, or adventure, mean for Lidl’s development in Europe?)

So why all this public activity? Well, Lidl’s impact on the Spanish grocery market has been rather modest, despite having been present in the country since 1994. Its market share has only reached 3.8%, according to LZ Retailytics data, which is lower than in France, Poland or Austria. Estimated gross sales per store, an important productivity indicator, show EUR6.6mn for Lidl in Spain in 2016, which is in the bottom third of all of its countries, lower than Greece, Italy or Hungary.

This is reason enough to beat the big drums. Of course, it is market leader Mercadona which exerts massive sales pressure on foreign Lidl, exactly because the Spanish supermarket operator’s concept is so close to Lidl’s: a very price-aggressive, private label-focused, standardised, process-orientated distribution system. One might think that Mercadona could be seen as the perfect supermarket fusion of Lidl and its sister banner Kaufland.

Hence all the activity: increasing minimum wages; focus on young employees where youth unemployment is still high at 45%; and implementing the dual education system (which is crucial for Lidl’s management, who are trained in Germany). Furthermore, Lidl stresses that it buys goods valued at EUR3.2bn a year in Spain, of which EUR1.7bn are exported; it has clean labelling for private label ingredients; its been reducing sugars in its soft drinks – even if this is just in reaction to new legislation in Catalonia; and the retailer’s organic food lines have been extended to some 90 products.

Finally – and rather surprisingly – there is another competitor arising that is increasingly prompting Lidl in Spain to become more proactive: Aldi Nord. In no other country has Aldi Nord been as innovative and progressive in terms of marketing as it is in Spain – a blueprint for its international markets.