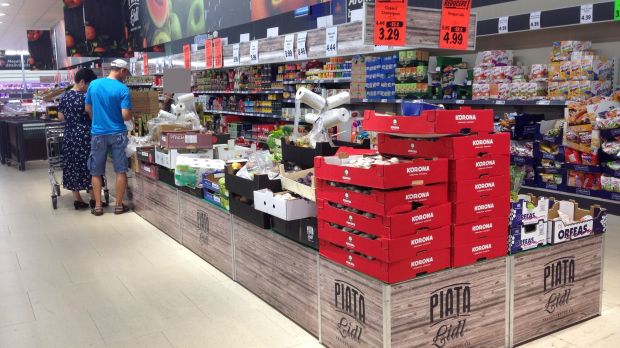 LZ Retailytics
Schwarz Group is the market leader in Romania with its Kaufland and Lidl (pictured) banners. The group's market share for 2017 is double that of Carrefour, the number two in the country.

Lidl is establishing an IT centre of excellence in Romania. As part of its Lidl Digital arm, the hub in Bucharest is to provide e-commerce and management solutions for the digital platforms of the Schwarz Group-owned discount banner in around 30 countries.

The hub, which will go live next month, will employ over 100 software developers and consultants specialised in SAP, Hybris and Java this year, as well as Scrum Masters, Business Analysts and Application Managers. Lidl Digital has been developing online business models for the discounter for more than ten years. It is based in Neckarsulm and Berlin, Germany, and has technology hubs in Barcelona, Bucharest and Sofia.

“Lidl Digital is positioning itself among the leading tech hubs in Romania, both through the project complexity but also the role it plays in Lidl’s global digitalisation strategy. I am very proud that we will have in Romania the second biggest Lidl Digital hub after Germany,” says Lidl Romania Member of the Board, Frank Wagner.

Opinion Investment in Romania – and E-Commerce?

20 February 2018
Strengthen your strengths. With 20 million inhabitants, Romania is by far the second largest country in the eastern EU behind Poland, and holds much greater expansion potential than the discount-saturated Polish market. In Romania, Schwarz Group is already market leader, with an LZ Retailytics market share of 27.3% for 2017, more than double that of number two, Carrefour.

And the commitment to Romania is strong. For the coming financial year, Kaufland plans to double its investment on the previous year to EUR200mn, with 10 new store openings. This stands very much in contrast to the restrained approach in its home market, and a general reduction in spending.

Lidl, meanwhile, which contributes a bit more than a third to Schwarz’s sales in Romania, is keeping an eye on its German discount competitors as all players consider the national discount market to be underserved. Rewe Group’s discounter Penny has decided to bank on Romania after having given up in neighbouring Bulgaria. And arch rival Aldi Süd is also said to be working secretly on a market entry to Romania.

Clearly, both Lidl and its sister banner Kaufland were early to recognise the potential that Romania holds. The decision to locate the IT hub in Bucharest, which cements Romania as a hub for the retailer in south-eastern Europe, seems only natural – with the one limitation being the question what that means for the existing hub in Bulgaria’s Sofia. The legal environment, IT infrastructure, workforce supply and wages are attractive for the retailer, and unlike physical retail stores, the good thing about IT is that people can work from everywhere (which may explain the decision for the party cities of Barcelona and Berlin – no offence to Neckarsulm).

But more importantly, the investment reflects a commitment to e-commerce – at least the idea of e-commerce. After the first proper online shop for ambient grocery was powered down in Germany last November, it didn’t look good for any new attempt. However, Lidl is rolling out its non-food online shop to more and more markets internationally; and it is very likely that Lidl shoppers in virtually all its European markets will be able to order garden chairs and gumboots online some day in the not-too-distant future.

But as for a full-fledged grocery online operation, including fresh and frozen foods and home delivery or click & collect, we will still have to wait a while. The first proper online shop will definitely not pop up in Germany next time – selling only dry groceries in such a big and fiercely contested market could only be considered half-hearted. It is far more likely to emerge in a country which all the international IT specialists at Lidl Digital will have elected as the perfect starting point – it could be the UK, or possibly a smaller rather than a major market. This might be Ireland or Portugal, due to their relatively high price level and market coverage; or the Czech Republic or Slovenia, due to the specific competitive situation.