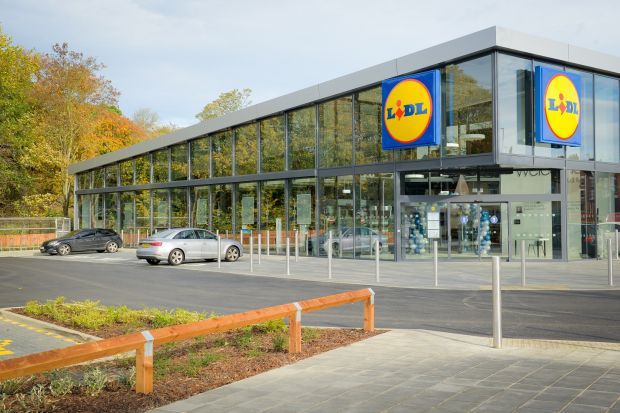 Schwarz Group
There are a lot of windows to clean at Lidl's store blueprint.

Lidl is jamming the brakes on the roll-out of its latest store concept which was only introduced in late 2015. Lebensmittel Zeitung reports that – following the dismissal of CEO Sven Seidel earlier this year – the Schwarz Group-owned discounter is cutting back on measures that are considered too cost-intensive. This mandate has come from the long-standing head of the German retail group, Klaus Gehrig.

Key activities initiated by Seidel included an upscaled store design, larger stores that feature their own training rooms and toilets including baby changing facilities. In place of this, a sized-down concept will now be rolled out, adapted to the local catchment.

In addition, Lidl has taken a step back on Seidel’s online strategy. Following the discontinuation of trials of Lidl Express – a convenience format combined with click & collect options – it now seems that the plan to offer click & collect services at all newly built stores has likewise been scrapped.

Opinion Lidl Is No Porsche

Lidl has been an impressive growth machine over the last few years, outperforming most of its rivals. A large part of this growth –  especially recently – has come from investment in nicer, brighter and larger stores, rather than from further network expansion. Sven Seidel seemed to be the perfect person to further develop the concept, taking it more upmarket. After all, Seidel used to work for Porsche Consulting, so he should bring some luxury flair to the discount grocer.

It was astonishing to see that Schwarz Group was willing to pour all that money into costly glass palaces. After all, investment in more upmarket stores only makes sense if you can achieve higher sales and higher sales densities in return. So, did Seidel succeed?

It is above all the factor of larger stores that has driven growth. Sales per store has improved, as is clearly indicated by LZ Retailytics data. Across total Europe, Lidl reached EUR7.2mn in 2016, up from EUR7.0mn in the previous year, and just EUR6.5mn in 2014. However, when productivity is measured in terms of turnover per square metre, the data is far less impressive: this measure remained virtually static at EUR8,100 from 2015 to 2016. In Germany, Schwarz Group’s key market, turnover per square metre declined, according to LZ Retailytics data.

The impact of the massive spending spree – which we should acknowledge only actually began in 2015 – is therefore questionable. Store extensions may have worked well, but this is not something that can be repeated constantly. There is a point when over-sized stores will eat into sales density, not to mention the negative impact on overheads.

The situation is not irretrievable, but what should Lidl do? The new Lidl boss Jesper Hojer will have to find new answers. Playing safe, Gehrig has decided to cut spending. That is surely not the worst thing to do. After all, Lidl is not the Porsche of grocery stores. Not yet anyway.