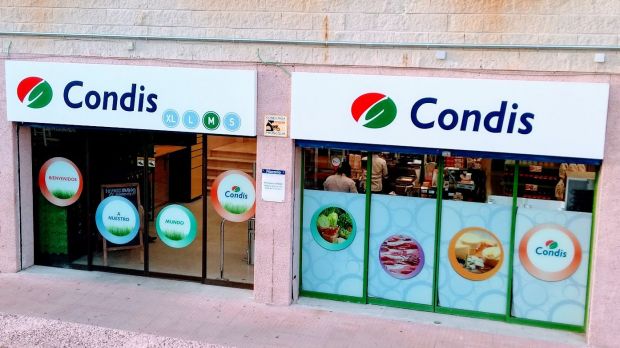 LZ Retailytics
Considered retailers had a combined total of 7,000 stores, and retail sales volume of some EUR10bn in 2017.

These regional retailers are often family businesses, enjoying a strong commercial position in their region of origin. Despite their comparatively small size, they benefit from competitive buying volumes, thanks to major buying alliances such as IFA and Euromadi.

Future growth for these regional chains is expected to be fuelled by their venture into new Spanish regions, new channels, and expansion through franchise. The top of the ranking is occupied by Bonpreu (Catalonia), but retailers from northern Spain are expected to be particularly dynamic, such as Uvesco (Basque Country), Alimerka (Asturias) and Gadisa (Galicia). 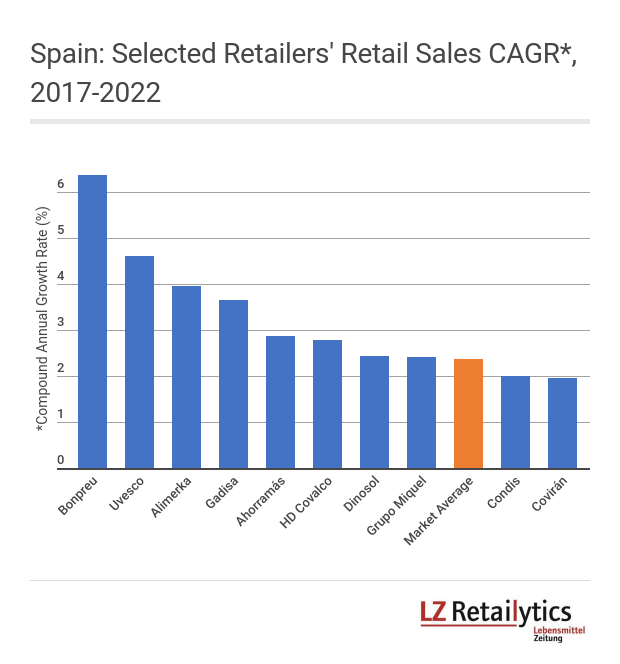 LZ Retailytics
LZ Retailytics selected the 10 largest Spanish regional retailers with a market share below 2% in 2017.

09 February 2018
Comparing retailers based on their smaller size is debatable, particularly as they operate across varied geographies and channels. It nonetheless provides an interesting overview of players which often remain below the radar. Top line growth hides different realities. In the graph below, we look at two metrics: the forecasted average yearly growth in terms of Total Sales Area (in sq m) and Sales Density (EUR per Sq m). 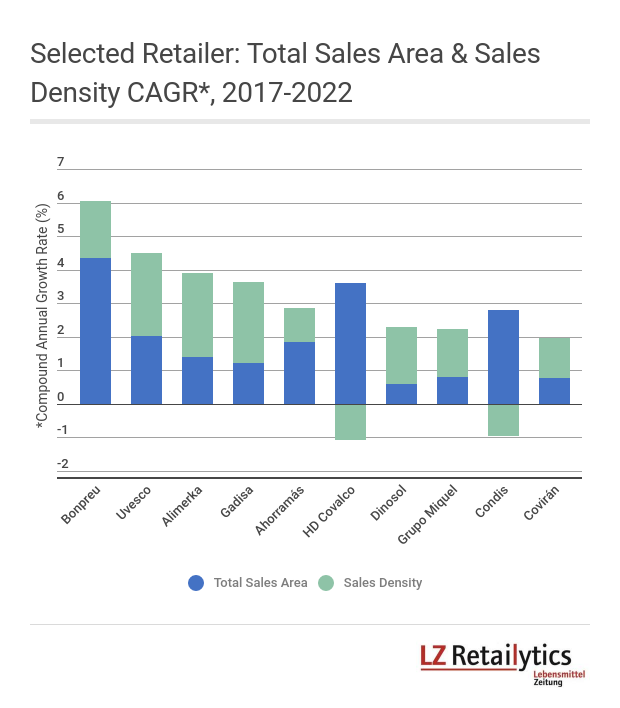 We see a contrast between retailers fueling top line growth thanks to the opening of additional sales space, and those optimising their network performances. In terms of openings, Bonpreu, Condis and HD Covalco are expected to lead the way, with the former planning to open new supermarkets and superstores in Catalonia, and the latter having ambitious franchise plans. At the opposite end of the spectrum, Alimerka prefers to enlarge its existing network rather than driving net store openings.

Regional chains benefit from a strong image in terms of regional assortment and fresh produce, which is vital for generating traffic. The evolution of sales density gives a glimpse into the network's productivity, which is impacted by many factors, including customer traffic, average basket size, pricing strategy, inflation, and a significant variation in sales area.

In the Canary Islands, Dinosol relies on the tourist influx, but we believe the expansion of price aggressive competitors in the archipelago would ultimately pose a threat. Similarly, HD Covalco and Condis' productivity may be hampered by the conversion of mom & pop grocery stores to franchises. Both may suffer not only from increase competitive pressures on proximity formats in Catalonia, but also from the enhanced value proposition of refurbished Lidl and Mercadona stores.

LZ Retailytics subscribers have access to key data and forecasts of retailers across 40 European countries. Forecasts are continuously adjusted to provide a comprehensive and accurate vision of the retail markets. Please visit our website for more information.