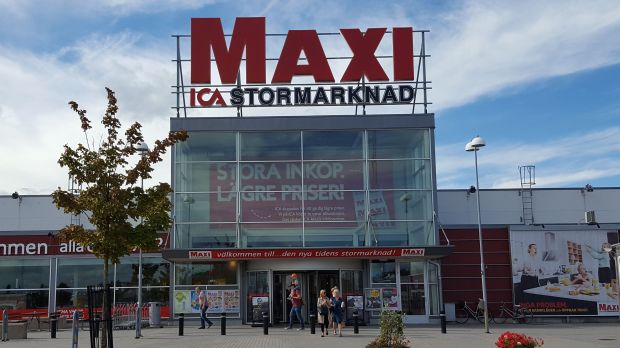 The retailer also disclosed that grocery e-commerce sales climbed 50% to reach around SEK1.2bn (EUR125mn). The darkstore that was previously announced is to open by the end of the third quarter, in an existing warehouse in Johanneshov. It will be able to serve the whole wider Stockholm region once fully operational.

During the course of the year, Ica in Sweden launched around 200 new meal solutions products, contributing to record a 6% sales rise for this growing category. Convenience food will remain a focus in 2018 along with healthy, organic and local groceries and economy ranges. In its home market the grocer expects to open 6-8 new stores this year.

Rimi, the retailer’s Baltic operation, recorded net sales growth of 1.4% to EUR1.444bn, mostly driven by price increases. In Estonia, store conversions from its Säästumarket discount banner to Rimi, together with full and temporary store closures lead to a net sales decrease of 2.9%. In Latvia, sales growth of 4.3% was mostly driven by price increases while sales in Lithuania decreased by 0.1%. The retailer plans to open between 6-8 stores in the Baltics this year, not including the stores it will gain through its Palink acquisition. This acquisition is still waiting for Ica’s sell-off of 17 stores before it can be completed.

Opinion A Fight for USPs

Given that the retailer’s non-food sales decreased in the year, the continued strong development of Ica Gruppen’s hypermarkets is impressive. The general trend of minimarkets closing goes on and the retailer closed 17 Ica Nära stores in 2017. However, the format is still showing positive sales growth as stores with low footfall are replaced by more urban locations.

Even if Ica’s sales development is to be seen as positive overall, it still had to settle for a lower place on the podium last year. Axfood namely recently reported 2017 net sales growth of 7.9% for its Willys and Hemköp supermarket banners. Willys budget supermarkets generated like-for-like sales growth of 4.3% and Hemköp 3.1% both beating Ica Gruppen’s best performing banners. LZ Retailytics forecasts Axfood’s banners (including E-commerce and Eurocash border stores) to continue showing higher growth rates than Ica’s four grocery banners in the next five years. 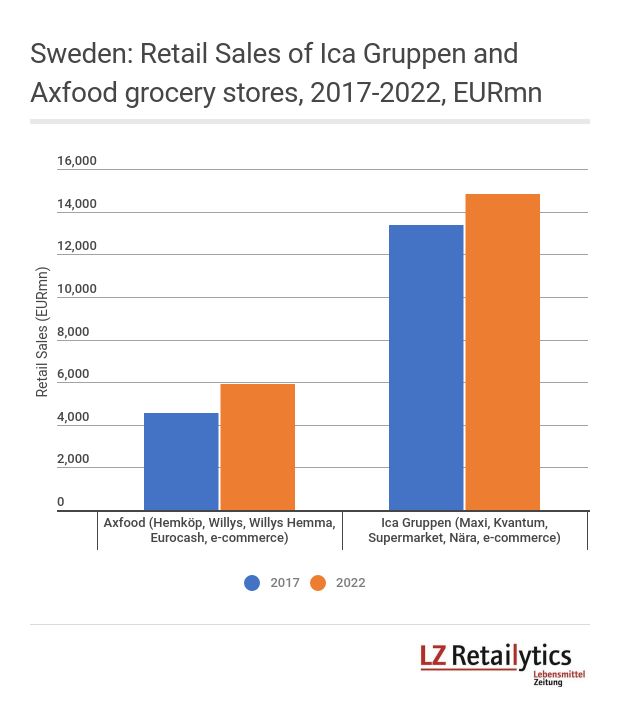 LZ Retailytics
For Axfood we expect a total growth of 30% while we forecast Ica to only grow by 10%. However, this would still leave the latter with a slightly higher absolute growth.

Axfood has very clear profiles for its grocery operations, with Willys offering good value for money and Hemköp taking a clear position as a quality-proximity format. This clarity has been rewarded by increased sales densities for several years now. Ica Gruppen is addressing this by focusing its efforts on organic, convenience, healthy (Hemköp’s strengths) and budget lines (Willys USP) and will also need to stay vigilant going forward, especially when it comes to explaining the advantages and differences of its various banners.

When it comes to the darkstore its very positive that the retailer has managed to set a deadline this year for an initiative that will enable its grocery e-commerce to grow faster and become more efficient. Food on the go is another logical investment area as the food-service market is showing higher growth rates than grocery stores in the country.

The slow sales development in Lithuania stands out in the Baltics and must be disappointing for Ica Gruppen. Sales were likely impacted by Lidl’s expansion and market share growth coupled with the market leader Maxima’s corresponding price moves. Hopefully, Ica Gruppen can secure a quick takeover of Palink early this year to improve its economies of scale in the country and thus its capability to follow on price.