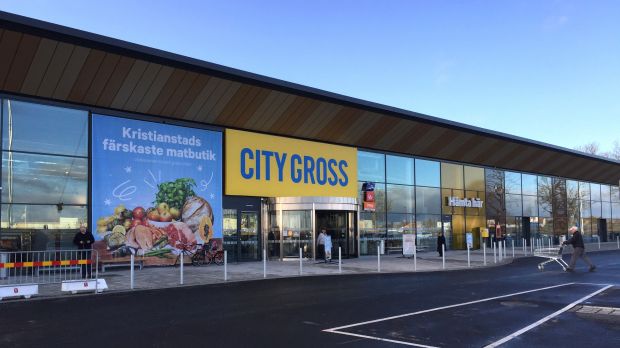 LZ Retailytics
The store, located in a developing retail park outside Kristianstad in Southern Sweden, promotes itself as the city’s freshest food store.

LZ Retailytics was invited by Sweden’s fourth largest grocer Bergendahls to see its new compact City Gross hypermarket concept. City Gross is the retailer’s largest banner by far and the majority of its 42 stores are in Southern Sweden. So too, is the retailer’s brand new big box in Kristianstad, where we met up with store manager Richard Bengtsson for an exclusive tour and interview.

The store has a sales area of 4,445 sq m, stocks around 20,000 SKUs and has a private label sales share of 11.5%. Its exterior looks modern with its glass frontage and wooden roof; and can easily be seen from a distance when approaching it on the highway. The store is located in a retail park which is still in development, with a shopping centre and another hypermarket due to open in the direct vicinity.

Bengtsson disclosed that an important element of the new concept, which is to be rolled out across Sweden, is to provide a warm, welcoming atmosphere. This is noticeable straight away in the pre-store area with a café offering snacks and dishes that can be heated and consumed in a secluded dining area. In the adjacent kiosk, tobacco, betting services, OTC medicines and confectionery can be bought without entering the store itself. 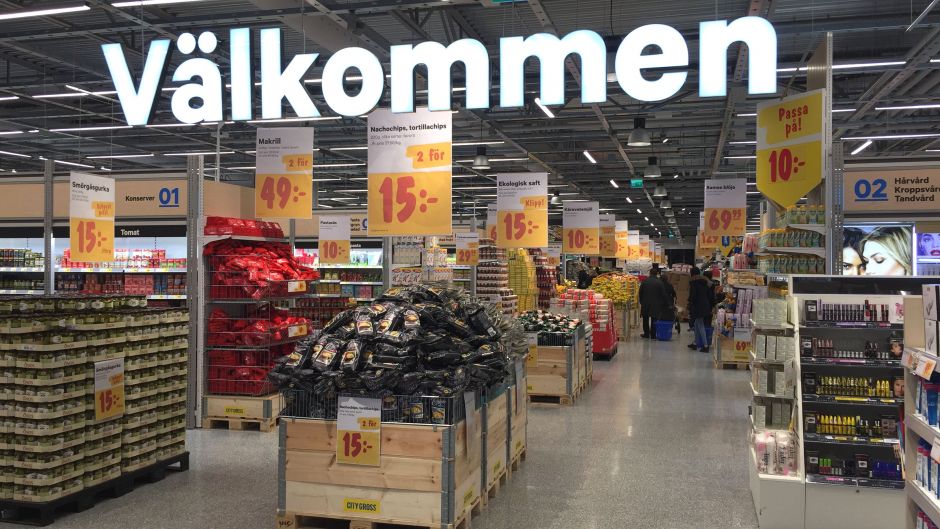 LZ Retailytics
Starting with both ambient food and non-food is a smart compromise to ensure that shoppers don’t skip the latter, but still have a convenient shopping experience.

Entering the actual store, we are welcomed by a wide aisle flanked by ambient food sections, health & beauty, as well as non-food categories including toys, kitchen life (leveraging its own Duka line as a store-in-store) and underwear. It is clear that the retailer has focussed on the most relevant non-food categories that either complement the food offer or have a high potential for impulse purchasing.

Promotional islands line the middle of the aisle, signalling good value for money and getting shoppers into a buying mood early on. Navigation here and throughout the store has been limited to the main category numbers and names on the first shelf in each aisle in order to avoid a “sign jungle”. 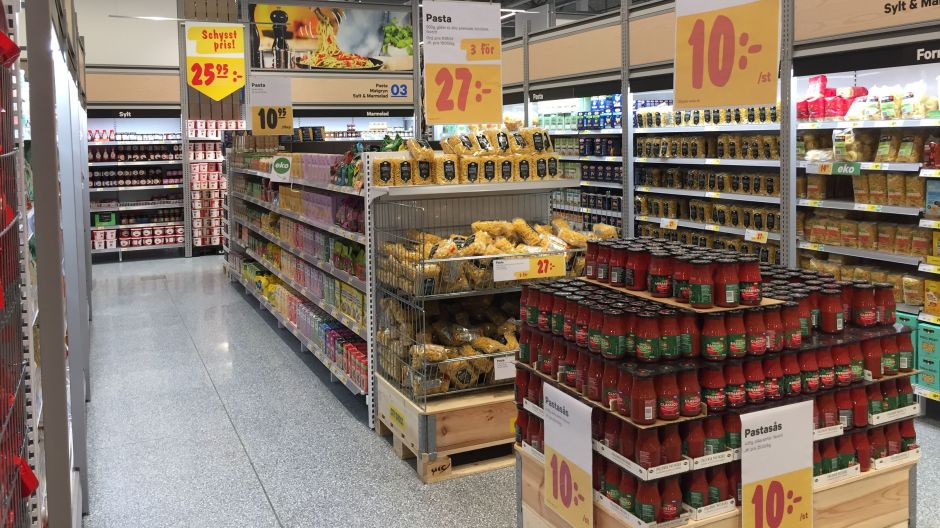 LZ Retailytics
Gondola ends and shelf talkers are used to attract shoppers into the side aisles. Each section is designed to have a secluded feel, with room to browse through at the shoppers' own pace.

Next, the store opens up into the fresh department, which starts with a wide fruit & vegetables section and continues with spreads, charcuterie, cheese, fresh meat; and lastly the serviced counters and in-store bakery, which cover almost the entire back wall. While overall the store focusses on big box volumes and offering good value for money, Bengtsson told us that the purpose of this section is to transmit the “here-and-now” feel of a fresh market hall and thereby cater to a different customer behaviour and shopping pace.

In-store production is one of City Gross’ strengths and the retailer uses this to differentiate through its own ready meals, deli, prepared seafood and fresh bread. Store manager Bengtsson also sees service quality and staff friendliness as instrumental in achieving shopper loyalty and therefore he pays strong attention to attracting the right employees. 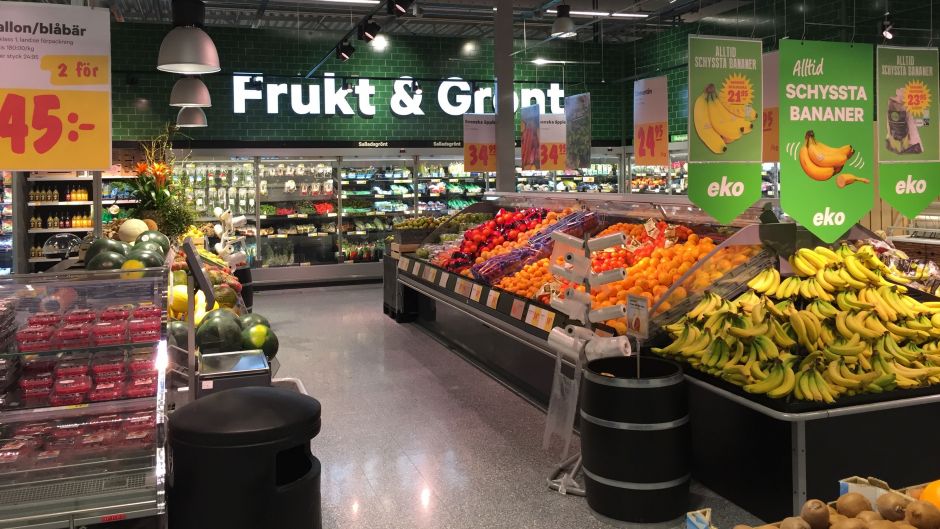 LZ Retailytics
The fruit & vegetables department is very comprehensive. The green wall tiles used in this section of the store set just the right tone, conveying freshness.
After the bakery section, on the way towards the checkout area, shoppers pass through the juice, dairy, beverages, toiletries and paper, confectionery, seasonal, flowers, pet food and frozen sections in that approximate order. Self-checkout tills dominate the checkout area. There are eight checkouts for shoppers opting for the mobile scanning alternative, two ITAB Moveflow self-scanning tills and six traditional tills. Bengtsson revealed that the self-checkouts accounted for almost 40% of the sales in the first couple of months and that the goal is to reach 50%.

From the checkout area, as well as anywhere in the store, shoppers can easily backtrack through one of the several shortcuts if they have forgotten anything. At the store exterior, accessible from the car park, there is an area where shoppers can collect groceries they have ordered online. The orders are picked from a warehouse hub in Hässleholm, some 30 km from Kristianstad, and sent to the store. 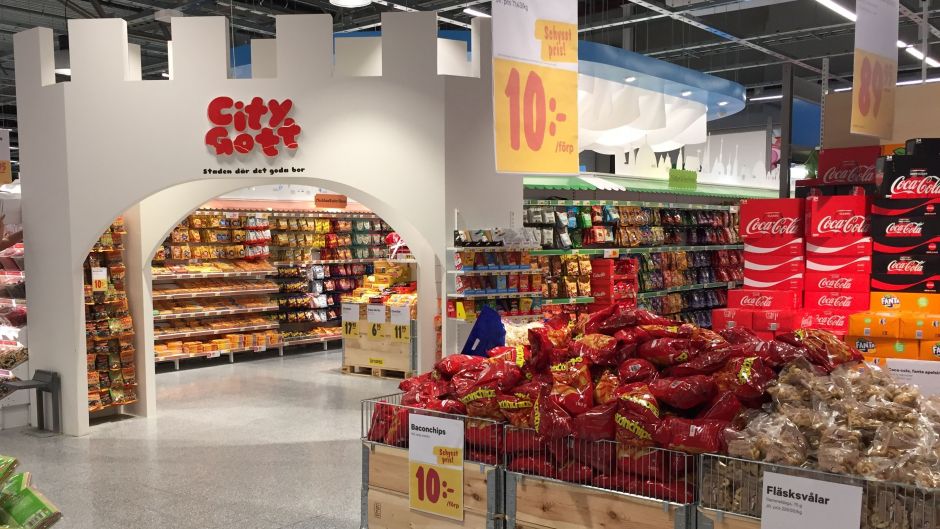 LZ Retailytics
The confectionery section has great stand out in the store due to a castle shaped prop labelled “City Gott” (City Candy).

With its new concept, Bergendahls has created a very pleasant shopping experience. Promotions are not in your face; there are few extravagant displays; and in-store signage has been used modestly. Everything is planned with the shoppers’ convenience in mind, which makes the store easy to shop; with few elements likely to cause annoyance, with the possible exception of the candy castle which could be a bottle-neck for some parents in a rush.

Some examples of the focus on convenience include: mobile scanners which are able to give personalised offers; shortcuts as shoppers navigate the store; merchandising by shopper mission (such as everything for children grouped together); starting with ambient food categories rather than fruit & vegetables; allowing shoppers to by-pass non-food if they wish; and keeping the frozen section at the end. The concept has a similar logic to competitor Stora Coop when it comes to the non-food assortment, merchandising and layout; which is no coincidence as both are modern Swedish hypermarket adaptions, that have been created recently.

When it comes to the fresh department, our view is that none of Bergendahl’s competitors offers something more comprehensive on a consistent basis. Fruit & vegetables, fresh meat, fish, poultry, bakery, charcuterie, cheese, the deli – all of these sections affirm this view. As a family-owned retailer directly controlling all of its stores, Bergendahls should be able to push through a speedy roll-out of the new concept. It can then promote its convenient fresh grocery experience nationally and consistently live up to this promise.

However, it remains to be seen how the concept will be adapted to its larger existing big boxes, given that the store we visited is a brand new site.  While it may be more challenging to plan its existing stores in such a convenient way, we expect that they will get even vaster serviced counters, a larger assortment for HoReCa customers and possibly external shop-in-shop partners. Bergendahls’ own home furnishing banner Granit could be a nice fit for the latter. 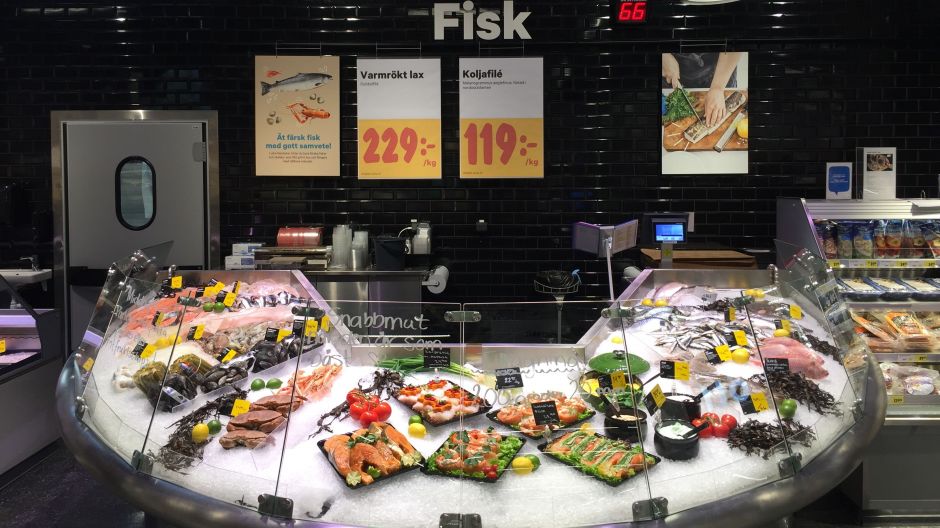 LZ Retailytics
The retailer prepares fish in the store and this is getting increasingly popular amongst its shoppers, Bengtsson revealed.

We think that the concept has all the right ingredients for a hypermarket to meet customers’ needs in the future Swedish grocery retail market: relevant non-food categories, a convenience-based store plan, a pleasant atmosphere, visible but moderate promotions and a comprehensive food assortment with a focus on fresh.

Private label is an area where the format is currently behind its competitors, which might hurt its price perception and make it more difficult to innovate and control areas such as special interest food and organic. This is however not critical given that private labels are not a top factor for most Swedes in determining where to shop. Still, the retailer has ambitions to improve in this area. Another positive point is that the banner offers click & collect as well as home delivery of groceries. However, we feel it could utilise this strength even more by offering drive-ins, with employees bringing the groceries to shoppers’ car boots, like some of Ica’s hypermarkets do.

To sum up, City Gross has some three store openings per year planned for the next few years and we believe that this new take on the big box will enable the retailer to keep expanding; not only in the few remaining green-field locations in Sweden, but also at more central locations. We forecast the banner to experience the fastest growth rate of all Swedish hypermarkets over the period 2017-2022, albeit growing from a lower starting point than its main competitors. 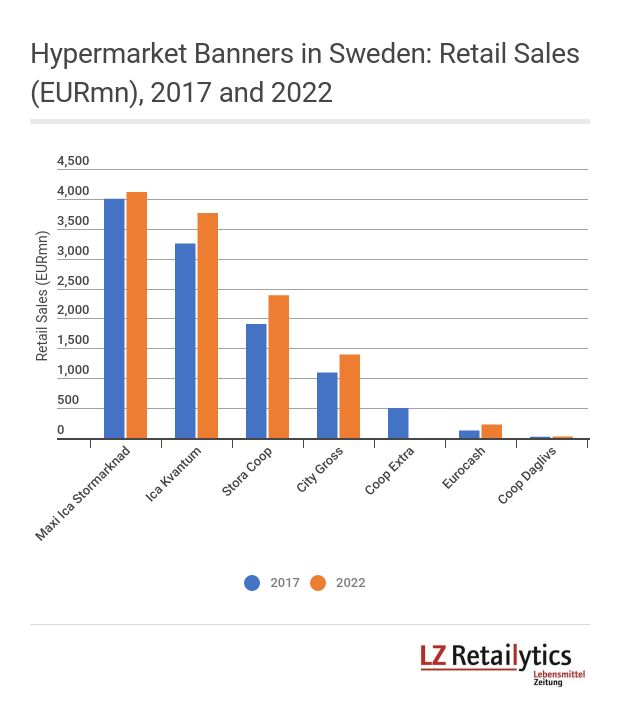 LZ Retailytics
LZ Retailytics forecasts that City Gross will have the fastest growth rate of all hypermarkets in Sweden over the period 2017-2022, driven by new store openings and improved sales densities.

Read about the other stores we visited in Sweden: