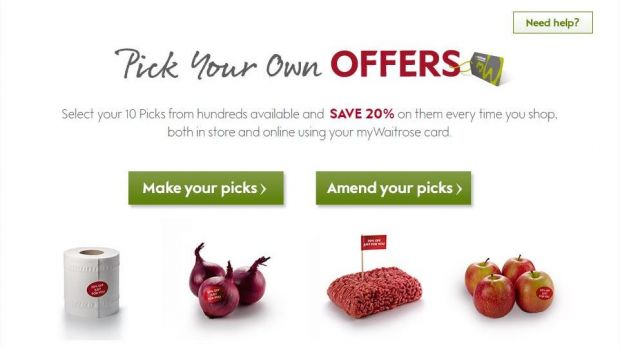 Waitrose
The revolutionary Waitrose scheme allowed shoppers to select up to ten items and receive a 20% discount each time they shopped.

Waitrose is to close its personalised ‘Pick Your Own Offers’ loyalty programme at the end of this month, reports The Guardian. The scheme, which was considered ground-breaking at launch, has been deemed “too confusing” for shoppers. It is thought that shoppers struggled both to select products for the offer and to remember which ones they have chosen.

Pick Your Own was launched to great acclaim in June 2015, as it allowed myWaitrose loyalty card holders the ability to personally select ten favourite products from a list of hundreds, on which they received a 20% discount every time they shopped. The scheme was funded by Waitrose and its suppliers, who signed up to offering the personalised discounts instore and online.

Instead of offering ‘Pick Your Own’, it is thought that Waitrose will now move to targeting shoppers with personalised offers and coupons, similar to the scheme operated by sister company John Lewis.

Opinion Focus on Loyalty and Costs

Loyalty and personalisation appear to be the latest battleground among the UK retailers. Last week Sainsbury’s, saying that it wanted to know its customers “better than anyone else”, announced that it was investing GBP60mn (EUR73.22mn) to acquire its Nectar loyalty card business from parent company Aimia. Meanwhile Marks & Spencer, which introduced a personalised Sparks loyalty programme two years ago, this week appointed data science company Starcount – owned by Tesco Clubcard founders Edwina Dunn and Clive Humby – to enhance customer insight through personalisation.

In a highly competitive UK landscape, price is a huge focus for the large retailers as they battle the expanding discounters, but loyalty is their defence and point of differentiation. It is a shame to see the Waitrose ‘Pick Your Own’ scheme closing as, in our view, it was a scheme that almost got it right. Low prices on products that shoppers were actually interested in buying is a novel and attractive idea. Not only for Waitrose, but also for suppliers, as the scheme included large as well as smaller brands that perhaps could leverage the opportunity to increase visibility and volume. However, the means of delivery was costly to Waitrose and its suppliers and the overwhelming choices perhaps too complicated.

Whilst loyal customers appreciate a personalised experience, it seems that above all else busy shoppers also value convenience and simplicity. The direction of travel from now on will be interesting. myWaitrose offers instore are to continue and these have been easily understood and well received by shoppers, although also costly for the retailer. These include free tea and coffee and a newspaper for a minimum spend, as well as discounts on dry cleaning, cookery courses and a 20% discount on fish counter purchases on Fridays. The next iteration of Waitrose’s personalised initiatives will need to remain equally appealing to shoppers, whilst striking the balance between personalisation, cost and over-complication.